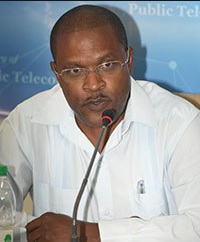 Dating back to the 2019 World Radio Congress of the International Telecommunications Union (ITU), he said Guyana has turned its attention to countries that have been trying to secure frequency allocations for mobile communications from satellite and lower earth-orbit stations.

“We believe that with our hinterland, that with the dispersal of our population, that is the only way. We are never going to be able in probably in my lifetime, to serve those populations economically with terrestrial mobile,” he said.

The TA Head said Guyana was seeking to get “behind” the major countries that have been seeking to secure spectrum assignments for mobile telecommunications to be delivered by satellite.

The GTT Chief Executive Officer, Damian Blackburn said that with rapid advances in satellite technology, his company was willing to collaborate with the other telecoms providers in Guyana and the government to bring 21st century telecoms to the hinterland.  “If we can use our influence because, as you know, we have an American shareholder in some of the evolution of the satellite and then we’ll also offer that to the Guyanese telecommunications community,” he said.

Mr. Griffith said the TA was currently in talks with all of the licensed operators on spectrum assignments that would allow them to expand their networks, coverage and services

He noted that currently, for instance, Guyanese in the Rupununi purchase cellular phones from neighbouring Brazil and also Brazilians use Guyanese cell services.

“Along the border in the Rupununi, a lot of people there they just step across the border and they buy cell phones from Brazil because that is where their people…The mobile phone transmissions spill over the border into Guyana’s territory where it is in fact cheaper and it something we have to deal with,” said Mr. Griffith during the Public Utilities Commission’s (PUC) inaugural Round Table whose moot was “Telecommunications Liberalization and Consumer Expectations”.

Mr. Griffith said a consultant has been hired to develop a plan for the Universality Fund that would be used to deliver telecoms services to areas that the operators consider unprofitable. The deduction is calculated on 1 % of revenue from operators. The fund is to be governed by representatives of the operators, government and consumer representatives. Consumer advocate Dr. Yog Mahadeo, who is a former CEO of GTT, issued a call for public disclosure of the fund and its subsequent use.

The fund, Mr. Griffith said, would be audited separately from the TA.

Meanwhile, Digicel Guyana said since Guyana’s telecommunications sector was liberalised on October 5, 2020, her company has modernised its mobile network to  LTE and is currently taking steps to expand its population to coverage 98 percent of Guyana by increase its mobile sites by eight more to 38.

The Chief Executive Officer of E-Networks, Vishok Persaud is banking on the major evolution of satellite technology. At the same time , he urged operators to guard against high-orbiting satellites with low latency as well as other challenges such as limited solar energy due to poor weather or inaccessibility to some areas to take generators . He urged an informative and educative process to manage expectations by residents who believed that problems could be easily fixed.

Head of Digicel Guyana’s Business to Business, Nalini Vieira announced that her company has since applied for permission to offer fixed services.

GTT has for several decades been the lone landline provider.

Mr. Blackburn announced that the four new divisional Chief Operating Officers have been tasked with improving overall customer services by improving broadband speeds, reducing the wait-time in stores and improving the reliability of the mobile network.

Mr. Blackburn credited his company would ensure that  Guyana gets 4.5 and 5G LTE, in addition to the fibre-optic

Mr. Persaud told the forum that since landing a submarine fibre-optic cable from Barbados in 2019, his company has accelerated its connectivity of Guyana with fibre with higher speeds at lower prices. He said E-Networks was also rolling out a 5G network across the country.

Mr. Persaud urged fellow operators to arrive at a “common ground” in order not to replicate services but instead focus on coverage, quality, use-ability, education, viability, and collaboration.

Currently, Guyana has 40 small Internet Service Providers that have been exempted from licenses because they do not operate international gateway but the TA still governs their frequency licensing.

PUC Chairman, Della Britton said her regulatory agency was compiling performance and quality of service indicators from independent sources internationally and locally. “As the premier watchdog of the operators, we would want to have data that is independent of those indicators, those quarterly reports and other mandated information that we get from the operators sow e are looking at innovative ways in which we can d our independent monitoring,” she said.