No State-owned airline on the cards- Finance Minister 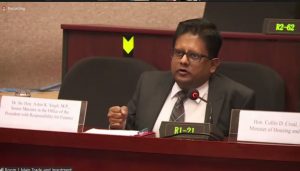 “It is not currently on the agenda to establish a state-owned airline,” he told a trade and investment forum at the the Inaugural Diaspora Conference.

He noted that a government investing a State-owned airline is too risky, citing the example of the cash-strapped regional airline, LIAT (1974) Limited, from which Barbados, and St Vincent and the Grenadines have exited as shareholders because of the financial burden. “You’ve seen, for example, the challenges with LIAT,” adding that COVID-19 has further dented the operations of  a number of carriers.

The state-owned Guyana Airways Corporation was declared bankrupt and shut down in 2001. Largely due to COVID-19, the Trinidad and Tobago-state owned Caribbean Airlines has been on a drive to cut operational costs by reducing staff.

Instead, the Finance Minister said government has been successfully wooing private airlines to serve the Guyana route. “We are pushing aggressively to attract more international airlines to come to Guyana and we are actually seeing the results of that already so at a time when airlines are closing down their operations and reducing routes, we are seeing international airlines actually expressing an interest to come to Guyana,” he said.

Guyana has approved several reputable airlines including Caribbean Airlines, American Airlines, JetBlue,  COPA and Suriname Airways. Dr. Singh said talks were continuing with Virgin Atlantic with a view of getting that carrier to serve the Guyana-United Kingdom route.