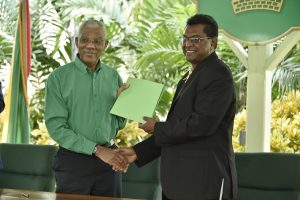 Leader of the People’s National Congress Reform (PNCR), David Granger on Thursday credited himself with improving his party  and being the first leader to have been elected President of Guyana since 1985.

“I know there is noise out there but I am not worried about that. I faced noise before, I faced rivals before and other competitors but in the final analysis the members of the PNC, they know me, they know that I have moved the performance of the PNC from what it was before in the 2000s, early 2000s,” he said on Public Interest television programme.

Mr. Granger has been scathingly attacked inside and outside the party for failing to deliver on employment, not stimulating private sector-led investment, increasing debt, and losing the last general elections by deciding against calling it shortly after the December 2018 no-confidence motion.

Granger sought to shore up his image ahead of the next Congress which he said has been delayed due to the pandemic.  “They know the truth about my performance and they know that I always abide by the constitution of the party,” he said. PNCR sources have said that Granger, Joseph Harmon, Aubrey Norton and others for the leadership of that 60-year party whose Central Executive Committee could in another two weeks decide what format the congress would take and when it might be held.

He remarked that he is the first PNCR Leader to have been elected President of Guyana since 1985 when Mr. Desmond Hoyte had been declared winner. Mr. Granger led the PNCR-dominated 10-year old coalition of A Partnership for National Unity+Alliance For Change (APNU+AFC) into victory in 2015, but lost power at  the 2020 general and regional elections that had been marred by claims of rigging.

The former Guyanese leader dismissed claims in certain quarters that he was afraid of facing other contenders for the leadership of the PNCR. He noted that longtime PNCR members Carl Greenidge and Aubrey Norton had “challenged me and I have won.” “As far as leadership is concerned, I have no problem with Congress” he said.

Acknowledging that many persons had stated that they had not seen him, Mr. Granger said he and his party had been busy “doing a lot of groundwork” following a review of the coalition’s electoral performance. “We have been paying attention to the grassroots of the party,” he said.

Mr. Granger acknowledged that APNU has since dwindled with the withdrawal of the Working People’s Alliance (WPA) and the Justice For All Party after their expected representatives had not been extracted to become parliamentarians. He hoped that eventually they would return to the coalition.

He also said he was instrumental in keeping the coalition together for 10 years and five years as a government from 2015 to 2020. “I am not an immodest person but I must say my leadership, the experience which I brought to the partnership under the coalition, I think people accepted that I was a good manager of these six different parties and that I had the experience and that I, too, had the vision, I shared the vision,” he said.

Referring to the decision for not sending the PNCR Chairman, Volda Lawrence and PNCR General Secretary Amna Ally and other senior party members to Parliament after the declaration of results, he said the current legislators reflected gender balance and would be able to remain in the House for another 15 years. “Political service is also about fulfilling the people’s needs and you don’t have to be an MP (Member of Parliament) to fulfill the people’s needs. You have to have a vibrant party which goes out into the communities and finds out what the people and make representations through the MPs,” he said.