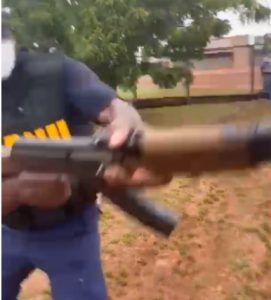 A CANU agent allegedly struck one of the persons associated with Linda’s Supermarket.

The co-owners of a supermarket in Lethem, Region Nine were Thursday afternoon arrested by police after the Guyana Revenue Authority (GRA) seized a quantity of items that were allegedly smuggled into the country.

CANU said Lyndon Franklyn was arrested and that 30 cases Black Stone, four cases of Skarloff and nine cases of Blend Seven Whiskey  were seized because no customs duties were paid. “All found in the suspect’s motor lorry (truck) and several other bottles of Liquor found in his premises at the said address,” the agency said.

CANU alleged that the suspect was seen entering Guyana from Brazil in his lorry and was followed and was subsequently seen emptying suspected smuggled and undeclared goods in his yard when GRA and CANU Officials intercepted him and uncovered the smuggled items among other goods packed in his truck. He is expected to be charged and placed before the Lethem Magistrate’s Court for breaches of the Customs Act.

Agents of the Customs Anti-Narcotics Unit (CANU) earlier today swooped down on Linda Supermarket to assist GRA officers in executing a search warrant, Head of CANU, James Singh said. He added that he personally asked the owner to desist from obstructing the agents from carrying out their operation but he allegedly refused to do so.

The gate to Linda’s Supermarket that was intact. CAMU denied that its agents broke it down.

Asked to respond to the other allegations, Mr. Singh opted not to get into a “back-and-forth” but said if complaints are made, recordings obtained from body cameras would be checked. 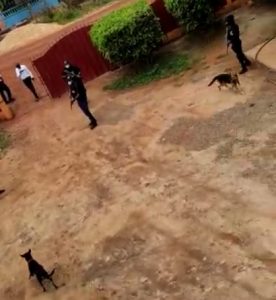 The dogs inside the compound scampering away immediately after a CANU agent fired a round.

Video provided to News-Talk Radio Guyana 103.1 FM/ Demerara Waves Online News revealed that at least one of the CANU agents fired a round ward off dogs that someone associated with Linda’s Supermarket refused to lock up despite repeated requests by the CANU agents who were in the yard.

In another video, someone claimed that he and others were held in the GRA (Lethem) compound and were not allowed to leave. He further singled out one of the CANU agents as the one who had opened fire earlier.  “This one here is the one that pulled the trigger. This one, right here, like shoot. He pulled the trigger. He like to shoot. This is the one that shoot up in my yard ; got to get his face properly,” he said. As he went closer to the CANU officer to record him, that law enforcement agent called on him to move and advanced appeared to have struck him with the assault rifle with which he was armed. “Move from in front of me

CANU said no drugs were found during the search. One of the Franklyns questioned how the items seized could have been deemed un-customed when the truck passed the authorities before going to the supermarket.

CANU did not refer to the alleged assault, but promised to explore the possibility of more training. :t was holistically reviewing the incident to address the need for further training of its Ranks to ensure its Ranks are able to withstand civilian agitation and intimidations.

Additionally, CANU implored civilians to desist from advancing to or attacking its officials in any way whilst they are executing their duties.

2021-04-15
Denis Chabrol
Previous: OPINION: Daring to be about Guyana, calling things as they are
Next: AFC suggests Patterson’s Public Accounts Chairmanship legally secure but govt has a plan