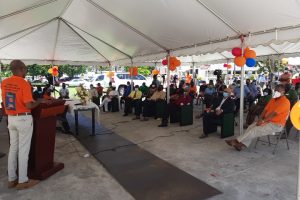 “What will guide me is the lifespan of the training. I would say by the end of the year, we should be in a position to have officers go out and do offshore inspections,” he said in an exclusive interview with News-Talk Radio Guyana 103.1 FM/ Demerara Waves Online News.

Mr. Hamilton said that currently officials are examining the costs to train senior inspectors about safety specifically in the hydrocarbon sector. “We are looking at the dollars and cents matter because we have several proposals from different places,” he said.  The Labour Minister said the arrangements and decision on whether to access training from Mexican or Trinidadian companies would decided would be made within one month.

He said ExxonMobil, the American Chamber of Commerce- Guyana and other industry stakeholders were being engaged in revamping Guyana’s OSH legislation and eventually the draft laws would be published and stakeholders would be engaged.  He hoped that the consultative process would be concluded in time for the Bills to be tabled in the National Assembly before the third quarter (July- September).

“We have to do in OSH special legislation for Oil and Gas industry. That is the instruction that I have from the highest authority that we must be the primary place that is developing the necessary legislation,” he said, adding that the International Labour Organisation (ILO) was willing to provide support.

After those consultations and feedback, he said the drafts would be sent to the Attorney General’s Chambers and eventually to Cabinet for approval before they are tabled in the National Assembly for eventual passage and assent.

General Secretary of the Guyana Bauxite and General Workers Union (GBGWU), Lincoln Lewis, reacting to the announcements by the Labour Minister that there would be stepped up enforcement of the existing and new OSH laws, said it was too early to conclude that the pronouncements were mere rhetoric. “I would want to give him a chance and see the results from what he has said,” Mr. Lewis told News-Talk Radio Guyana 103.1 FM/ Demerara Waves Online News.

Mr. Lewis welcomed the Labour Ministry’s plans to strengthen and enforce OSH laws, saying that the labour movement has been pushing for such action over the years. “These are things that are necessary. We have been advocating for those things. We have been advocating that even in the new economy where you have oil and gas, that our legislative agenda must include those areas and will have to be supported by the necessary support services,” he said.

The Labour Ministry has since taken steps to increase the number of OSH inspectors from nine to 30 to police the entire country. Plans are also being rolled out to decentralise the OSH operations by opening up offices in the regions.