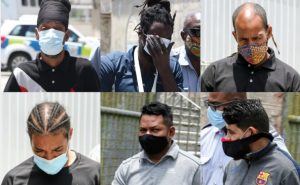 Two Guyanese are among a group of foreigners accused of importing over US$50,000 worth of cocaine into Barbados as well as possessing a firearm and ammunition.

They are  Dexter Curtis Caesar and Leon Jermine Seales.

Barbados Today reports that the two Guyanese, two Trinidadians and two Venezuelans were remanded to custody by a Barbados court.

They are charged with possession, supply, trafficking and importation of cocaine within Barbados’ territorial waters on March 20.

They are also charged with possession and importation of a firearm and four rounds of ammunition.

The six are to return on April 27.

Police objected to bail on the drug charges. Officer Gibbons spoke of the seriousness of the offences and the fact that five of the accused had no immigration status.

The immigration status of the sixth man, Caesar, is in the process of being verified after hearing claims that he is a Barbadian resident, though born in Guyana.

Defence lawyer, Michael Lashley told the court that Caesar has been living in Barbados  since 1983 and attended primary school there. In addition, he said that his client had two children in Barbados and was well known to many on the island.

With respect to the fact that the accused man is not known and given the fact that these are bailable offences, I believe that he is a good candidate for bail in the circumstances,” Lashley said in relation to bail on the drug charges. He said the only question for the court would be whether the Immigration Department could confirm that Caesar lives in Barbados. Lashley said he was aware of non-nationals who have received bail for matters involving drugs.

The court also heard from Lashley that the Trinidadians had Barbadian connections and as such there were people here would have been willing to sign bail for them. He eventually asked for bail in respect of all the accused men.

Lashley attempted to reiterate his argument that the magistrate had jurisdiction to consider bail on the drug charges but was again rebuffed.

Given that five were non-nationals and contrary to their lawyer’s arguments, it was highly unusual for bail to be granted in circumstances such as these, the magistrate said. She added that she could not recall such a case.

Magistrate Renee said: “The offences are very serious and if the accused persons are found guilty at the High Court, the usual sentence in such cases carry imprisonment. For those reasons, I have denied the application for bail. I don’t think I am disadvantaging the accused persons because the sentences associated with these kinds of matters, under the legislation, are very serious.”

But the QC persisted with his plea for bail. He mentioned a case where a non-national, on drug charges, was given a fine and also allowed to leave the island. The case, Lashley said, involved more drugs than in this case.

“And even in getting fines I am not seeking to say that the High Court is bound… but recently for firearm offences the court has been giving fines,” Lashley said.

Before adjourning the matter and remanding the accused, Magistrate Renee asked Lashley to bring the case to show that the non-national spent no time on remand.