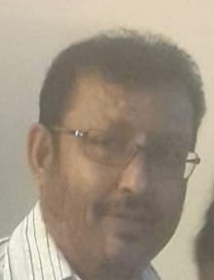 Police say Jaigobin was travelling in a black Toyota Tundra when it toppled several times on the Mabura Access Road at about 3 PM. The mishap occurred about five kilometers from the Mabura Police Outpost

Jaigobin,54, of Low Lands, East Coast Demerara, and the other injured persons were transported to the Linden Hospital.

At the time of the accident he was on work assignment for the Ministry of Finance’s COVID-19 financial relief project.

Several years ago, he survived an acid attack that had been widely believed to have been linked to his principled position on accountability in cricket governance.

“When police arrived at the scene they met Franky Wessel Trotz who related that he was in the cab of the said vehicle which was heading to Mabura when the driver lost control of the said vehicle causing it to turn topple several times before coming to a halt,” police said in a statement. Police added that Singh and Gyadeen were admitted and “their condition is said to be stable.”