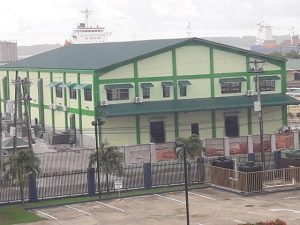 The Ministry of Health’s Drug Bond in Kingston, Georgetown.

Health Minister Dr. Frank Anthony on Monday said steps were being taken to continue stockpiling drugs and medical supplies, after months of dumping GYD$10 billion worth of expired drugs from public sector bonds.

Flanked by top officials, he announced that on Tuesday a new tender would be issued for supplies for the remainder of 2021.  “In this way we will be able  to stabilise the supplies and hopefully by June-July we will be able to have the situation under control because we are making every effort to address the shortages that we have,” he told a news conference.

The Health Minister said GY$12 billion in emergency supplies have been already procured- GYD$4 billion in essential medicines, GY$5 billion on personal protective equipment and GYD$3 billion on reagents- which have seen the Health Ministry being able to meet 64 percent to 100 percent of the needs of the 10 administrative regions.

Dr. Anthony hoped that by June or July, the current shortage would be reduced. “The key thing here is to make sure we bring medicines into the system and get it out to the people because we don’t want people coming to the hospitals or the health centres and then they have to go and use a prescription to go and buy stuff so we are trying to eliminate that,” he added.

A tender, he said, was scheduled to be opened on Tuesday for four months of supplies. Already, tender was opened in March and the National Procurement and Tender Administration Board has a contract for two months of suppliers.

He detailed that since the new administration took office in August, 2020 the Health Ministry’s Food and Drug Department has been assisting in clearing out all expired drugs and medical supplies from the Materials Management Unit (MMU).  Dr. Anthony recalled that the MMU had dumped almost GYD$1 billion worth of expired drugs in August and September, 2020, another GYD$1 billion worth of supplies from October 2020 to March 2021, and GYD$3 billion from the GPHC.

“This, of course, is very costly to us, the country and the taxpayer,” he said.

The Health Minister said the findings of a  comprehensive audit, which was conducted last week, has seen the validation of stocks of drugs and medical supplies, and a a similar process has started at all of the regions and the Georgetown Public Hospital Corporation.

In terms of the regions’ consumption of drugs and medical supplies, he said a lot of the items purchased were left idle. “I think in a lot of ways, the  things that were bought were not the things the regions were using and so you had a stockpile and nobody was using them,” he said. The Health Minister said most of the items had short expiry dates, partly due to the collapse of a computerised system.

The Health Ministry said the electronic system has since been kickstarted and is assisting in timely and efficient decision-making. He said similar systems are being put in place to track usage and replenishment of stocks in the region.

He said from January to October 2020, the MMU had been able to only satisfy 15 to 20 percent of requests, with some drugs for HIV, tuberculosis, diabetes and cardiovascular disease having been almost zero. Similar shortages, he said, had existed for anesthetics, HIV test kits, laboratory reagents and other items.