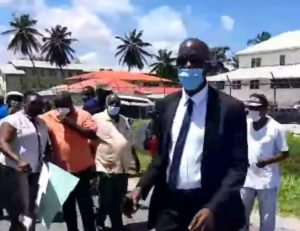 Trevor Benn outside the headquarters of the Criminal Investigations Department.

Mr. Benn said police questioned him about the lease of a plot of land on Mandela Avenue and the sale of land on Aubrey Barker Street on the grounds that he had no power to do.

He later emerged from the Guyana Police Force’s headquarters of the Criminal Investigations Department (CID), saying that the Irfaan Ali-led administration was now a “creeping dictatorship.” He maintained his innocence. “This is total harassment. I have done nothing wrong. I want to maintain that,” he said.

Mr. Benn was greeted by supporters and senior functionaries of the People’s National Congress Reform (PNCR) who accompanied him through the streets of Kingston, Georgetown.

The former Lands and Surveys Commissioner is already before the court on a charge of misconduct in public office in relation to lands at Ogle, East Coast Demerara that were supposedly owned by the National Industrial and Commercial Investments Limited (NICIL), government’s holding company for State assets. He said before that charge was instituted, he had been read a charge of receiving GYD$27 million by false pretence, but he pointed out that that money was paid to the State’s coffers.

Mr. Benn recalled that when he was arrested from his home last weekend, he was placed in a police lockups whose conditions were deplorable. “I spent almost 72 hours in the lockup with common criminals of every kind. My first cell was one filled with faeces running over and water all over the floor so this was intended to inflict maximum pain on me but I’m a Benn and these things don’t break us,” he said.