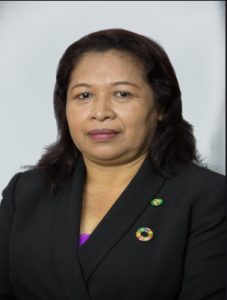 In debating the 2021 National Budget, she questioned why Dr. Singh did not announce the pay hike in his four-hour long budget speech. “My question, therefore Mr. Speaker, to the Honourable Minister of Finance  is what percentage increase in wages and salaries is this government prepared  to give to our public servants and our Joint Services?,” she asked.

Though the amount set aside for government emoluments was not mentioned in the Budget Speech, Vice President Bharrat Jagdeo had later said that GYD$10 billion have been allocated for “the revision of wages and salaries.”

She went as far as suggesting that someone else would be tasked with that responsibility and authority.

Under both the People’s Progressive Party Civic (PPPC) and APNU+AFC administrations, there have been either no negotiations or cosmetic talks that have seen both administrations imposing pay hikes at the end of the year.