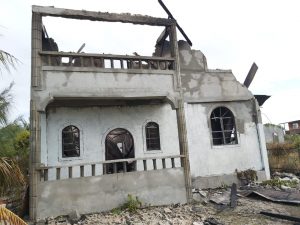 Twenty-seven persons were Saturday rendered homeless and one occupant was burnt as a result of three separate fires, Fire Chief Kalamadeen Edoo said.

He said the fire at Costello Housing Scheme destroyed two buildings and displaced 19 persons, who are members of five families. He said fire fighters received a call at about 11:45 AM and responded to the blaze that engulfed the building that was occupied by the families on the lower flat and the owner on the top flat.

Mr. Edoo said so far investigators believed that the blaze was caused by arcing and sparking as a result of a circuit breaker having been overloaded by too many appliances that were being operated by the tenants.

Earlier in the day at about 6:30 AM, fire fighters also responded to a call at 28 B Shell Road, Kitty, Georgetown. There, the blaze of unknown origin destroyed two houses and killed on pit bull. Two other dogs were rescued.  There, fire fighters believed that the blaze was caused by slack wire that started to spark.

Four persons were rendered homeless as a result of that fire, the Fire Chief said.

Ian Munroe, who was the lone occupant of the house at the time, said his mother and siblings went to the hospital early Saturday morning to accompany his brother who was injured by someone else. Mr. Munroe related that while and he and his friend were  walking out their birds, “we saw some smoke here in Kitty and then I got a phone call that the house started burning down just so.” He said a his 68-year old aunt and uncle lived at the back house where neighbours broke down the windows and rescued them. 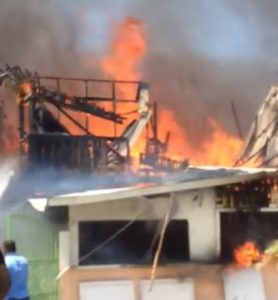 Fire gnawing away at one of the houses at Costello Housing Scheme, East Coast Demerara. (Screen grab from Newsroom video)

Mr. Munroe also said that based on accounts by neighbours, the fire was of an electrical origin because they saw the wires sparking at the house in front and all of the lights were flashing on, flashing off,” he said.

Except for a car and a bike, he said he lost everything including clothing and electrical appliances. The other occupants of the burnt houses are Marilyn Munroe,  Maureen Munroe and Leon Munroe

At Dazzell Housing Scheme, East Coast Demerara, four persons were displaced and a man was injured while he was evacuating the burning the house. Mr. Edoo said the victim was rushed to the Georgetown Public Hospital. The Fire Chief said the cause of the fire was not yet known as investigators would like to talk with the injured man.

Those homeless include Queen’s College teacher, Johan Osborne and her 12 year old son. She shared the house at 205 19th Street Dazzell Housing Scheme with her parents and siblings.