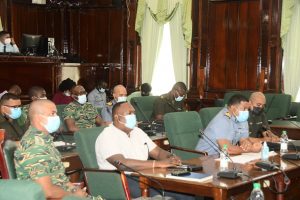 Top officers of the Guyana Defence Force (GDF) were Monday grilled about glaring discrepancies concerning the use of vehicles and high maintenance costs, including GYD$8 million that was spent on repairing one vehicle every month during 2016.

“Additional time would definitely give us an opportunity to peruse all documents and even interface a little bit more with the State auditors who prepared the audit and maybe that would put us in a better position to provide more clarity and concerns to these questions,” said Commander Vernon Burnett

Opposition and government members of the National Assembly’s Public Accounts (PAC) lamented the inability of the GDF team to provide proper answers to questions that date back to the 2016 Auditor General’s Report. PAC Chairman, David Patterson highlighted that the GDF ought to have been better prepared to respond to queries at the committee meeting because the GDF had been originally scheduled to appear in 2018. “This is unacceptable,” Mr. Patterson.

Those questions include whether any of the five contractors, who had been overpaid GYD$3.3 million were still working for the army given that there was a flawed system. “This was a lapse on the part of the staff. I am happy that we had been able to recover the sum. I want to assure the committee that our SOPs (Standing Operating Procedures) are now in tandem with the financial regulations and the stores regulations and it is our hope that such recurrence will never happen. We also have better trained staff that is working in the finance department and other departments that manage these transactions,” Mr. Burnett.

Mr. Burnett could not immediately say exactly what disciplinary action had been taken against any of the GDF staff members who had erred.

Due to the failure of the GDF team to adequately respond at the moment and opting to submit answers in seven days, Mr. Patterson successfully recommended that the accounting officers be given more time to prepare and return at the next PAC meeting. That date has not been fixed.

Mr. Burnett said Captain Mc Allister was no longer a member of the GDF and could not be contacted.  PAC members repeatedly  reminded Mr. Burnett that among his team was former Col. Administration and Quartering Paul Arthur who was the accounting officer in 2016. Mr. Arthur, for his part, remained virtually silent throughout the meeting but when he did speak, he expressed caution about providing inaccurate information to the PAC. “Sir, if I should venture an answer now it may not be truthful and I would be in breach of the policies or the Constitution here,” he said.

Governance Minister  Gail Teixeira acknowledged that there is always a problem when there is a change in the guard but she said in the interest of the reputation of the GDF, Mr. Arthur should and his successor should have collaborated before attending the PAC meeting. “Unless, files have disappeared, documents have disappeared which is obviously a different issue other than an audit issue,” she said.

While the GDF team could not provide information about the brand and type of the vehicle on which GYD$8.5 million was spent for repairs, the PAC Chairman told the meeting that it was in fact a Bedford 4 tonne tipper truck, licence number DFB 1530, that was assigned to the 4th Engineering Battalion. In one instance, it cost GYD$231 million to repair that vehicle. “This was a major repair that was done- replacement of an engine,” he said. Auditor General Deodat Sharma said the truck was seen but there were  no historical records about that vehicle and that he would have to check his working papers.

Commander Burnett acknowledged that there was a “lapse” in providing logbooks for all of the 232 vehicles owned by the GDF. Of the 32 for which logbooks had not been provided, he said five had been engaged in “sensitive” operations such as “intelligence” support. He explained that a number of those vehicles’ records that had not been provided for scrutiny by the Auditor General’s Office had been attached to the Military Criminal Intelligence Department, the Chief-of-Staff and G2 Branch. “These vehicles are usually involved in very sensitive operations,” he said.

After an officer of the Auditor General’s Office at the PAC meeting advised that the logs of vehicles assigned to government ministers and constitutional office holders are exempted from being checked by auditors, government member of the PAC Gail Teixeira said if the GDF wants certain vehicles to be exempted in the regulations, a request would have to be taken to the Defence Board that would eventually be discussed by Cabinet and then taken to the National Assembly for approval.

Commander Burnett said the logs of a number of other vehicles had not been checked because they had been deployed to border locations and others were being maintained at “vetted” privately contracted mechanics. Government PAC member Juan Edghill emphasised the need for all vehicles to be audited to determine fuel use, repairs, tires and other spares.

The GDF officer said since the 2016 audit, the army in 2018-2019 established and updated a filing system for all of its vehicles through a fleet management and fleet tracking system.  He said the GDF recently restarted its in-house maintenance of vehicles.

Overall, the GDF had spent GYD$374 million on vehicle maintenance in 2016.

On another issue, the GDF team could not say why 30 percent of a contract sum that had been awarded by the National Procurement and Tender Administration Board had been paid to the contractor, although the standing amount is 15 percent as a mobilisation fee. In that regard, Mr. Edghill called that a “loan” to the contractor. Commander Burnett remarked that “some of these questions were of concern to us.”