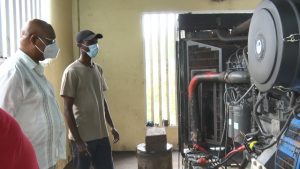 Residents and businesses in the north-western Guyanese town of Mabaruma now have 24 hours electricity supply, with the installation of a new generator, government said.

The generator was installed at the Mabaruma Power station in Region One (Barima-Waini). Public Works Minister, Juan Edghill said he was satisfied with the installation of the generator set to serve the regional capital.

“I am extremely satisfied that the engine arrived on Thursday, and today Saturday it is already installed and functional. So, that is immediate relief for the people of Mabaruma,,” he was quoted as saying by government’s Department of Public Information.

Region One Council Chairman, Mr. Brentnol Ashley  said the new generator replaces the previous one which was damaged. “The bearing in the crankshaft of the 750kVa genset would have mashed, and other problems would have developed as a result of that which has caused us to have the intervention of Government to have a new generator be procured so that the people of Mabaruma would not be able to suffer from additional power outages.” he said. He said the 750 KVA Perkins generator would complement the 500 KVA Doosan.

That generator was reportedly damaged two months ago due to a lack of maintenance because the previous Regional Executive Officer did not adhere to the maintenance plan for the generators, Mr. Ashley told News-Talk Radio Guyana/ Demerara Waves Online News. He said that had resulted in residents having 20 hours of electricity.

Mabaruma has a population of about 2,000 persons.

Meanwhile, the Regional Chairman said residents of Matthews Ridge would get increased electricity supply with the arrival of  a generator on Sunday at Port Kaituma. That generator, he said, is expected to be installed by Sunday. Currently, Matthews  Ridge has  no electricity, he said, because the generator stopped working one week ago.

He also said that Manawarin and Waramuri would soon be getting electricity for the first time with the expansion of the grid.