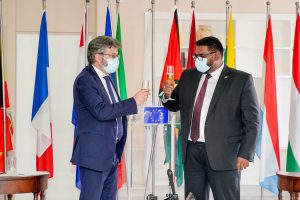 Guyana will continue to need budget support from the European Union (EU), despite the fact that the country is now an oil producer, Finance Minister Dr. Ashni Singh said Thursday.

“You refer to our imminent oil revenue and I will say that oil revenue notwithstanding, we intend to work very hard to qualify for every single Euro of budget support because it goes a long way in helping us to finance the important budgetary initiatives that we have included in our budget,” said Dr. Singh who is a Senior Minister at the Office of the President, responsible for finance.

Estimates are that Guyana is expected to earn about US$300 million annually from the Liza 1 well.

He made known government’s position at the EU’s announcement of a disbursement of GY$19.8 billion for budget support for the rehabilitation and maintenance of Guyana’s fragile and vulnerable sea and river defence system.

The Finance Minister reiterated that government was keen on securing a “vibrant and dynamic” non-oil economy. He added that the budget support would help to finance “critical interventions” and forging ahead with investments.

EU Ambassador to Guyana, Fernando Ponz Canto, in his remarks, also disagreed with those who believe that Guyana no longer needs aid because it is producing oil. “From far away Europe, people sometimes say these days that Guyana does not need more help because there is the oil going. We know this is not the case There is a need for a bridging period. There are many needs and there are many more things to do,” he said.

Mr. Ponz Canto said the almost U$10 million budget support is being provided, despite the COVID-19 virus-induced crisis.

The monies were not previously disbursed because of the absence of parliamentary oversight due to the passage of a then opposition-sponsored no-confidence  motion in December 2018.

Budget Support is a contract based on a partnership with mutual accountability. As stated in the financial regulations of the European Union, the use of budget support is subject to conditions. Eligibility criteria have to be met before signing a contract and maintained during its implementation before payments are made.