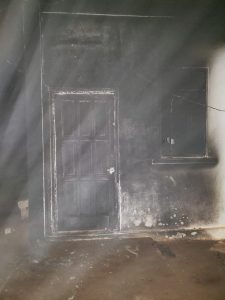 A police officer  reportedly said he and other ranks were performing duties in the enquiries office when they heard a loud explosion.

The incident occurred at about 2:30 Friday morning.

Instantaneously, they saw  a huge  blaze to the front door of the building and the policemen on duty say they immediately rushed and extinguished the fire, Guyana Police Force spokesman, Assistant Commissioner Royston Andries-Junor said.

Further checks disclosed that  the front door of the building was scorched and a partly burnt five gallon  bottle was at the front door.

Police  said they made further checks around the building but no one was seen around the area.

No one was injured during the incident.