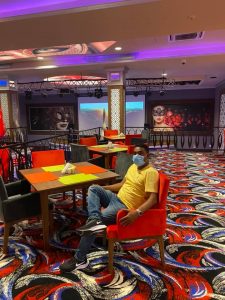 Sleepin Hotel’s Carnival Casino has received its licence on Monday  after submitting a fresh application to the Gaming Authority, ending a six-year long wait and the initial employment of 150 persons, hotelier Clifton Bacchus said Tuesday.

He explained that while the application was submitted recently, he had been engaging the Gaming Authority for about three months, providing that regulatory and licensing entity with copies of court orders, other documents and financial information. He said it was only after those were provided that he was informed that the Authority would be meeting to make a decision.

“This a sigh of relief after close to six years that the investment was lined up,” he told News-Talk Radio Guyana  103.1 FM/ Demerara Waves Online News.

The hotelier said new financial statements and other documents were submitted two weeks ago to the Gaming Authority and “they had a look it and so on and did not see any problem.”

Mr. Bacchus said investment in the hotel and casino amounted to about US$8 million. He explained that costs escalated about another US$1 million due to the need to reexport equipment, paying for licences that had not been granted and the maintenance of the building.

He said two weeks ago he started importing slot machines and other casino-related equipment to replace those that had been re-exported when it had become apparent that Carnival Casino would not have been granted a casino licence by the Authority under the then A Partnership for National Unity+Alliance For Change (APNU+AFC). “Within the last month, we have been bringing back,” he said, even as he said he was repaying bank loans. 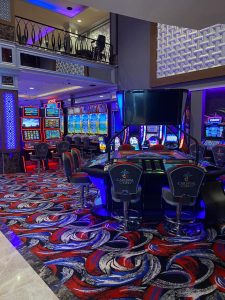 Mr. Bacchus said he was relieved at the decision by the Gaming Authority, after having spent at least GYD$18 million in paying upfront for two licences in recent years. He said he would be dropping legal action against the Authority now that the licence has been granted.

The five-member Gaming Authority was appointed about one month after the People’s Progressive Party Civic (PPPC) was declared the winner of the March 2, 2020 general elections. They are 1.Mr.  Manniram Prashad- Chairman of the Board; Ms. Abena Moore- Director;  Mr.  Sase Gunraj-Director; Ms. Genevieve Blackman-Director and Mr.  Mark Conway- Director

Mr. Prashad is a former Minister of Tourism, Industry and Commerce, Mr. Gunraj is a PPPC Elections Commissioner, Ms. Moore is Permanent Secretary of the Office of the President, Ms. Blackman is the Region Five Executive Officer and Mr. Conway is an Attorney-at-Law.