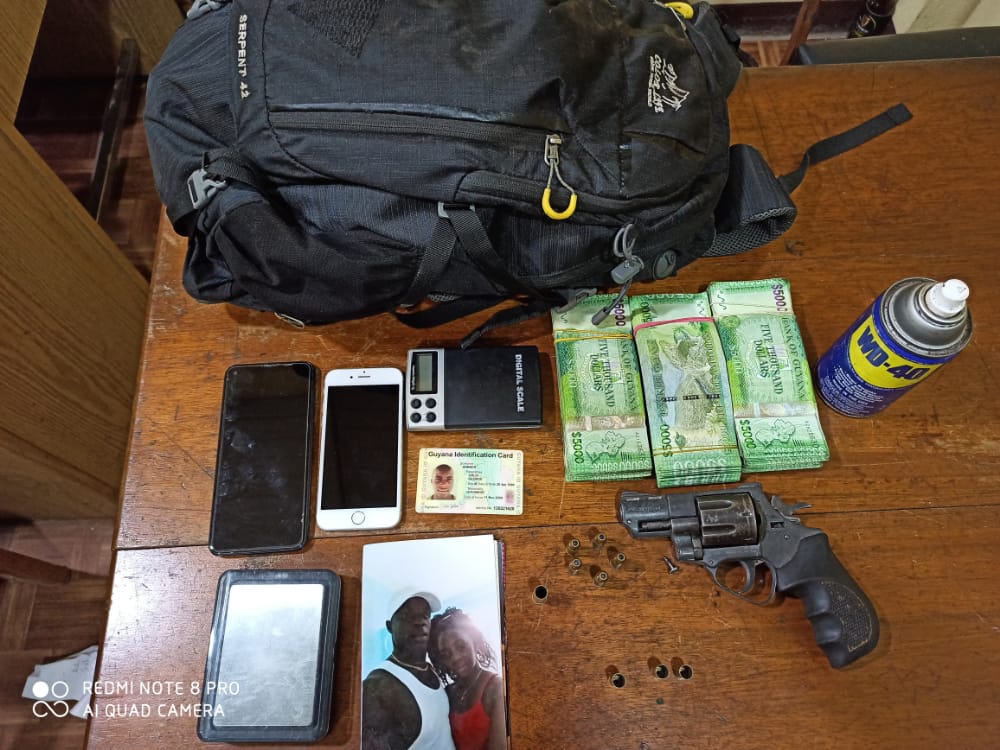 The cash and other articles that police said they found in possession of one of the suspects in a robbery committed on a couple at Mabura.

A suspect in a more than GYD$4.2 million robbery has been arrested and a number of the items and cash believed to have been stolen have been recovered, police said Wednesday night.

The names of the victims- a 49-year old businesswoman and her 40-year old husband – were not released , but police said the armed robbery occurred at Mabura, Region 10 at about 11 O’clock Tuesday night by two men , one of whom was armed with a handgun.

Guyana Police Force spokesman, Assistant Commissioner Royston Andries-Junor said police subsequently went to a location at Mabura where they saw a black XR motorcycle without number plates parked in a corner. The lawmen said the thickly vegetated area was combed and a man was seen. Police said when they made efforts to arrest him, he opened fire and  ran away but he was caught and identified as a 30-year old porknocker of Wismar, Linden.

The  spokesman said a search unearthed a black haversack containing GYD$2,330,000  a digital scale, two cell phones and one .38 Special Revolver with 5 live rounds. His other accomplice is being sought as the probe continues.

Police said the black XR motorcycle was stolen on Monday at about 7 PM on Monday November 23, 2020 during which a 30-year-old plant operator of Buck Hall, Wismar Squatting Area was robbed of same.

Investigators were informed that after returning him from conducting business on Tuesday, they were confronted by the armed suspect who pointed a firearm at the businesswoman and demanded that she hand over her belongings.

Police said several shots were fired in the air after she was relieved of her shoulder bag containing GYD$3,400,000  a quantity of raw gold valued GYD$800,000 and a wedding band valued GYD$80,000 before escaping with the other suspect on a black motorcycle. Two smart phones and a GPS were also discovered missing from the victims home which was ransacked, police added.