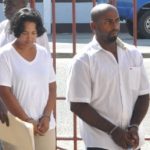 Bibi Goopaul, who along with her former lover, Jarvis Small were sentenced to 102- and 96-years’ imprisonment respectively for the 2010 murder of her 16-year-old daughter Ms Neesa Gopaul, on Friday asked the Court of Appeal to quash their conviction. Hearing the case were Chancellor of the Judiciary, Justice Yonette Cummings-Edwards and Justices of Appeal Dawn Gregory and Rishi Persaud.

The decomposed remains of Ms Neesa Gopaul, a former student of Queen’s College, were discovered in a suitcase at a creek along the Soesdyke/Linden Highway on October 02, 2015, days after she had been reported missing from her Leonora, West Coast Demerara home.

There were dumbells attached to the suitcase in an effort to submerge her body. A pathologist gave the teenager’s cause of death as blunt trauma to the head. Following a jury trial before Justice Navindra Singh at the High Court in Demerara, Bibi Gopaul and Small were found guilty of the murder.

Small is being represented by Attorneys-at-Law Mr Nigel Hughes, Mr Ronald Daniels and Ms Sophia Findlay, while Attorney-at-Law Mr Arud Gosai is appearing for Bibi Gopaul. Small’s legal team argued that the most grievous issue in the matter is the severing of the indictments to allow for their client and Bibi Goopaul to have separate trials. Mr Hughes submitted that even with the best directions in the world, a jury would have been prejudicial to Small given the evidence led by the Prosecution against Bibi Gopaul.

According to Mr Hughes, the only evidence led against his client was a pair of dumbells that were found at the crime scene. Assuming that the dumbells belonged to Small, Mr Hughes argued that there is no nexus between the items, his client and the murder of Ms Neesa Gopaul. The lawyer noted that there was no direct or even circumstantial evidence linking his client to the killing of the young woman.

According to Mr Hughes, during his client’s trial a witness testified to selling the dumbells to Small, while another said that he [Small] packed them while he was moving. Against this backdrop, the lawyer contended that the finding of the dumbells at the crime scene does not mean that his client did the killing. In fact, the defence lawyer, submitted that the case against his client should not have been sent to the High Court as there is no proper evidence upon which he can be convicted.

Meanwhile, Bibi Gopaul’s lawyer, Mr Arud Gosai contended that the evidence of the prosecution’s main witness, Simone De Nobrega was highly prejudicial to his client and resulted in a miscarriage of justice. De Nobrega was a former cellmate of Bibi Gopaul. She had testified that Bibi Gopaul confided in her that it was Small who had killed her daughter by bashing her head in with a piece of wood.

Referencing a case from the Privy Council, Mr Gosai argued that Justice Singh failed to warn the jury how to treat with the evidence given by De Nobrega. He said that one ought to treat with her evidence “extra careful” as there were many discrepancies in her testimony when juxtaposed with the case for the prosecution.

“Where there was crucial evidence in consistent with the State’s [prosecution] case and beneficial to the defence [Bibi Gopaul] the earned trial judge did not address there,” Mr Gosai argued. He argues that the failure by the Trial Judge do to so is sufficient reason to set aside his client’s conviction for murder.
According to the lawyer, the Trial Judge failed to inform the jury that De Nobrega was not a reliable witness as she was convicted for crimes of a dishonest nature. In fact, Mr Gosai noted that a part from the conviction, the woman was facing 26 charges for crimes of dishonesty.
He added that the Trial Judge did not even inform the jury that the prosecution’s key witness had been convicted. If Justice Singh had done this, Mr Gosai explained that the indicators from the case cited from the Privy Council would have rendered De Nobrega’s evidence suspicious and unreliable.
Both Mr Hughes and Mr Gosai submitted that the sentences imposed on their clients were unduly severe and not in conformity with modern sentencing principles. For the most part,  Mr Gosai adopted the submissions proffered Mr Hughes on this ground.
Mr Hughes noted that the case of Linton Pompey vs the Director of Public Prosecutions of Guyana which was decided by the Caribbean Court of Justice (CCJ), sets certain principles in terms of how the court must approach sentencing. According to him, the Guyana Court of Appeal in recent times has reduced sentences imposed on murder and manslaughter convicts by the High Court to one third of the initial sentence.
Further, Mr Hughes submitted that Justice Singh did not give an analysis of how he arrived at a base of 60 years for the sentence imposed on Small. Nonetheless, he argued that the sentence is beyond the natural life span of the average Guyanese. He argued, too, that the facts of the case did not warrant the sentence.
While Mr Hughes acknowledged that it was the murder of a young teen who appeared to have suffered a significant amount of blunt trauma, he pointed out that the facts of the cases did not fall within the doctrine of rarest of rare. Against this backdrop, Mr Hughes pointed out that imposing a sentence that is beyond the natural life and thrice more than what would have been imposed by the Court of Appeal is unduly served.
Relying on certain sections of the Criminal Law (Offences) Act, Mr Gosai, however, argued that Parliament intended for a lesser sentence other than a life sentence to be imposed given the circumstances in this case.
Instead of starting at a base of 60 years for the prison term, Mr Gosai said that the Judge’s starting point should have been 10 years. “Even for a life sentence, the starting point is 15 years. The Learned Trial Judge is plucking numbers from the air…,” Bibi Gopaul’s lawyer contended in his address.
The Court of Appeal will entertain further arguments in this case on Wednesday, November 11, 2020.