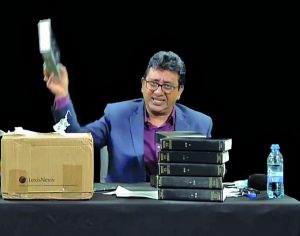 Director of Public Prosecutions (DPP), Shalimar Ali-Hack has withdrawn a charge against Attorney General and Legal Affairs Minister, Mr Anil Nandlall for the alleged theft of over $2 million in Commonwealth Law Reports from the State of Guyana.

Mr Nandlall, who was charged back in 2017, had been on trial for the offence of Larceny by Bailee before Senior Magistrate Fabayo Azore at the Georgetown Magistrates’ Courts. However, based on directives in a letter sent to her by the DPP, Magistrate Azore last Friday, October 16, 2020 discontinued the charge against the Attorney General.

The charge against Mr Nandlall had alleged that between May 18, 2015 and May 29, 2015 while being a bailee, in his then capacity as Attorney General [under the President Donald Ramotar Government] , he fraudulently converted 14 Commonwealth Law Reports valued at $2,313,853, property of the Ministry of Legal Affairs, to his own use and benefit.

Following the close of the Prosecution’s case, Magistrate Azore overruled a no-case submission made by Mr Nandlall’s lawyers and had called on him to lead a defence having found that sufficient evidence had been made out against him.

While the High Court and Court of Appeal noted that it can exercise its supervisory jurisdiction to review such a decision by a Magistrate, this is only done in extreme and limited circumstances.

Among other things, Mr Nandlall’s lawyers had sought a declaration that the charge against their client is not an offence unknown to the laws of Guyana, and therefore it was in violation of Articles 40, 144(4) and 149(d) of the Constitution of Guyana.

But the High Court and Appeal Court ruled that the offence for which Mr Nandlall is charged is provided for under Section 165 of the Criminal Law (Offences) Act. Therein, it states, “Everyone who commits larceny or any felony hereby made punishable like simple larceny, shall (except in the cases hereinafter otherwise provide for) be liable to imprisonment for three years.”

His lawyers had appealed the ruling of the Court of Appeal at the Caribbean Court of Justice (CCJ).

Mr Nandlall had previously stated that the State had agreed to pay for the Law Reports for him as part of his contractual engagement with the then Guyana government. He had even said that the arrangement received the blessings of then President Mr Donald Ramotar. The Special Organized Crime Unit (SOCU) had contended that since the Law Reports were bought with State funds they cannot be the property of Mr Nandlall.

Moreover, SOCU had said that there was no evidence of any agreement between Mr Nandlall and Mr Ramotar, and even assuming that there was such an agreement, the use of public funds in this manner is a flagrant violation of the Financial Management and Accountability Act.

Mr Nandlall has always said that the charge against him was instigated by Basil Williams, whose performance as Attorney General he has always criticised

2020-10-19
Denis Chabrol
Previous: CXC to go for 100 percent moderation of SBAs
Next: US keeping eye on gold smuggling from Venezuela – Kozak