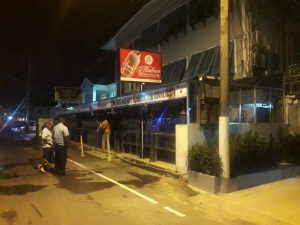 Firefighters Monday night saved a building on Middle Street, Georgetown that is owned by Nigel and Cathy Hughes and houses Midtown Restaurant, Bar and Hotel.

Mr. Hughes, who was on the scene, confirmed that based on the evidence, someone attempted to destroy the building by fire. He said the fire was set in four rooms where the mattresses were braced against the wall. He said the incendiary devices were wrapped in toilet paper.

Sources also said matches were seen at the scene.

The mostly wooden building, which once housed Sidewalk Cafe and Ariantze Hotel, was leased several years ago to Larry Singh who runs Midtown Restaurant, Bar and Hotel. Mr. Singh, who was on the scene, reportedly said that there were no occupants in the building as business was “bad”.

Fire Chief Marlon Gentle said firefighters received calls from security guards at nearby buildings after they saw smoke emanating from the upper flat of the Midtown building located on Middle Street between Camp and Waterloo Streets. 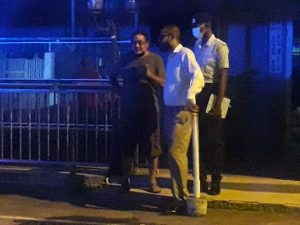 Mr. Singh once again rose to prominence about four years ago when he had leased a house  on Sussex Street, Albouystown  to the Ministry of Public Health after it had been purchased and remodelled into a pharmaceutical bond.

More than 30 years ago, he had run Tropical Airways which eventually folded, leaving hundreds of people stranded in Guyana and New York.

Midtown, at one time, had been a bar of choice for many top APNU+AFC coalition administration officials until the fallout over the rental of the Sussex Street bond.