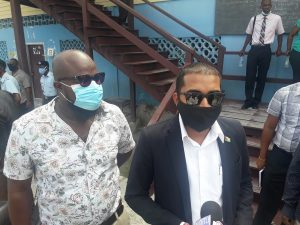 The General Secretary of A Partnership for National Unity Joseph Harmon on Friday said a communication breakdown led to the non-implementation of an agreement  for the Alliance For Change to hold the Vice Chairmanship of Region Four (Demerara- Mahaica).

“My understanding is that there might have been some breakdown in communication but that is a matter that is being investigated as well,” Mr. Harmon said.

He said People’s National Congress Reform (PNCR) executive member, Aubrey Norton had been responsible for informing the councillors “on the ground” about that agreement.

Mr. Harmon said the reversal of that decision for APNU’s Samuel Sandy to be replaced by the AFC’s Neilson Mc Kenzie would depend on talks between AFC Leader Khemraj Ramjattan and APNU Chairman David Granger. “The question of reversing will arise out of investigation which was completed and the discussion which will take place between the Chairman of the APNU and the Leader of the Alliance For Change

Region Four Chairman, Daniel Seeram of APNU said “on the day of the voting I had not seen any agreement” but he refused to disclose the details of an initial discussion about the Vice Chairman. “Those discussions would have been at at the party level and I do not wish to divulge that information,” he said.

Mr. Harmon, who is also the Opposition Leader, said he has not received any official indication from the AFC’s David Patterson that he would be resigning from Parliament. He has already resigned from the position of AFC General Secretary.

The Opposition Leader was optimistic that Mr. Patterson would not resign from the House as up to Friday morning thy were in contact with each other on important matters.