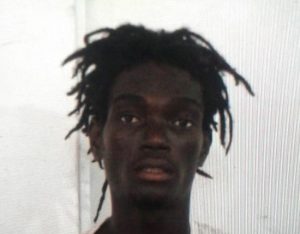 A 23-year old man , who is accused of armed robbery, early Wednesday morning escaped from the Lusignan Prison..

Director of Prisons, Gladwin Samuels said  Leroy Graham fled the jail at about 1:30 AM.

The Guyana Prison Service asked  anyone with information to contact the Lusignan Operations Room on 220 4173 or the nearest Police Station.

The situation at the Lusignan Prison, East Coast Demerara has become increasingly unstable ever since authorities confirmed that several inmates have been tested positive for the potentially deadly coronavirus, COVID-19.

Last week Saturday, prison guards shot dead two prisoners and injured five others when they attempted to break down the main gate after stoning guards during a visit by Home Affairs Minister Robeson Benn and Health Minister  Dr. Frank  Anthony.

Mr. Benn, speaking in the National Assembly on Tuesday, justified the decision by the guards to fire on the inmates, saying that authorities could not afford a repeat of prison escapes.

Back in February, 2002 the escape of five inmates from the Georgetown Prison had marked the beginning of almost 10 years of violence including killings, robberies, kidnappings and disappearances.

2020-09-23
Denis Chabrol
Previous: Letter from Sarah-Ann to Guyanese — American Ambassador
Next: GCAA gets GYD$609 million bailout due to COVID-19