US- Guyana private sector-led deal does not lock out China’s investments- Pres. Ali 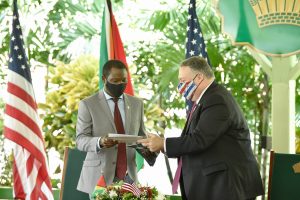 Even as United States Secretary of State Mike Pompeo stressed that State-owned enterprises are not the best fit for development, President Irfaan Ali said a deal with the United States to promote the private sector does not lock out China’s investments through the Belt and Road Initiative.

“There is no counter to anything. We are open to investment all over. This does not lock out investment from anywhere . This is just an initiative that unlocks new resources, potential resources. These are new potential investors and it expands competition and it gives us wider range and reach in terms of new capital and investors,” President Ali told reporters after the signing of a framework agreement that is part of the Growth of the Americas Initiative by Mr. Pompeo and Guyana’s Foreign Affairs Minister Hugh Todd.

Guyana and China in July, 2018 signed the Silk Road Economic Belt and the 21st Century Maritime Silk Road Initiative that could pave the way for funding infrastructural development. China also funded and constructed  the more  than US$150 million rehabilitation and runway extension at the Cheddi Jagan International Airport, as well as several Chinese companies have bid for the construction of a new Demerara River Bridge. A Chinese company also won the contract to build the Marriott-branded hotel in Guyana. Back in 2012, Guyana and China had signed an agreement to construct the US$840 million Amaila Falls Hydro project and Transmission Line by Sithe Global and China Railway First Group (CRFG) but the David Granger-led administration later cancelled the project.

In an interview with Guyana’s State-owned National Communications  Network (NCN), Secretary of State Pompeo stated that in contrast to China, the US wants to ensure that foreign direct investment is made in a  fair, transparent, competitive, legal and enforceable contracts.

“We don’t apply political pressure connected to our commercial enterprises.  There are other nations that operate very differently. China operates very differently.  The Chinese Communist Party shows up with its military and commercial deeply intertwined.  They put political pressure on countries to accept tenders from their country.  That’s not how American businesses roll.  We show up; we hire locally.  We are great environmental stewards.  We abide by the rule of law.  We respect countries’ sovereignty.  Those are the things that I think nations are looking for, and I think the new leadership here in Guyana is looking for,” Mr. Pompeo said.

The State-owned China National Offshore Oil Corporation is a member of the ExxonMobil-led consortium that is exploring and producing oil offshore Guyana.

In a swift reaction, China rubbished Mr. Pompeo’s charge that China’s investments in the Caribbean were linked to political positions. “Third, China develops relations with Caribbean countries including Guyana under the principles of mutual respect, equality, and mutually
beneficial and win-win cooperation. China attaches no political strings in bilateral pragmatic cooperation. which bring tangible benefits to
countries and peoples in the region. This is an objective fact that anyone without prejudice will admit,” the Chinese embassy here said.

At the news conference, President Ali explained that the agreement would see US capital and private sector to participate in the wide-ranging opportunities and infrastructure in Guyana, transfer of knowledge, transfer of technology, as well as private sector capacity building, integration and participation.

“We want to see more investment and more private sector interest from the US so I think this agreement not only sends the right signal but sets the foundation for that collaboration and cooperation, transfer of technology and more importantly building of local capcity in our local private sector,” Dr. Ali said.

Permanent Secretary of the Ministry of Foreign Affairs Ambassador Audrey Jardine-Waddell explained that a working group would be established and a work plan would be developed within 90 calendar days of the framework agreement. She said the accord would pave the way for the US and Guyana to identify concrete ways to further their “joint interests” in infrastructure growth, integration and energy security to “meet the economic goals of both countries.” Infrastructure refers to water, energy and hydrocarbons, buildings, airports, sanitation, Information Technology, logistics infrastructure, roads, railways, bridges, ports and tunnels.

“The framework recognises that private sector-led infrastructure development, particularly in the high-cost energy sector is one of the central tenets of the US-Caribbean 2020 strategy for promoting security, prosperity and well-being for both the United States and the Caribbean region,” she said.

The new People’s Progressive Party (PPP)-led administration has since returning to power in August, 2020 again been talking about reviving the Amaila Falls Hydropower project and constructing the new Demerara Harbour Bridge at another location other than at Versailles to Houston due to increasing shorebase and other development to support the oil sector.