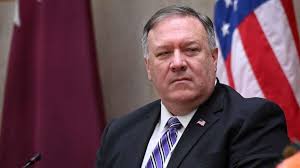 US Secretary of State Mike Pompeo

The United States (US) Secretary of State Mike Pompeo is expected to stress the importance of “inclusive and transparent governance” in Guyana during his two-day visit this oil-rich South American nation.

“We stand together with diverse population of Guyana, as inclusive and transparent governance will be key to building a sustainable future,” the State Department said in a fact sheet issued ahead of Mr. Pompeo’s two-day visit to Guyana.

The US Secretary of State, who had been one of the major international players calling for free and fair election results based on the national vote recount, is expected to ink a bilateral agreement with President Irfaan Ali before they host a joint press conference. In Wednesday’s fact sheet, the US State Department highlighted that “U.S. support for Guyana’s recent presidential elections, including electoral observation missions, were crucial to ensuring that the election was free, fair, credible, and transparent and reflected the will of the Guyanese people.”

Dr. Ali is on record several times as emphasising the need for inclusive governance, but he has never committed to executive power sharing. Vice President Bharrat Jagdeo had also cited the need for a new governance model that would include the People’s National Congress Reform (PNCR).

While Mr. Jagdeo had said a People’s Progressive Party (PPP) administration would hold talks with A Partnership for National Unity+Alliance For Change (APNU+AFC) after the Guyana Elections Commission (GECOM) had declared the winner, no such dialogue has been held.

The PPP administration has since gone ahead and appointed several State boards without any representation from APNU+AFC. Government has also used its simple majority of 33 seats to support opposition parliamentarian Lenox Shuman from the three-party joinder system for the post of Deputy Speaker instead of APNU+AFC’s nominee, Raphael Trotman.

2020-09-16
Denis Chabrol
Previous: No compromise of Guyana’s territorial sovereignty, says Jagdeo ahead of Secretary of State Pompeo’s visit
Next: Guyana, US to activate Shiprider agreement for air, maritime antidrugs fight