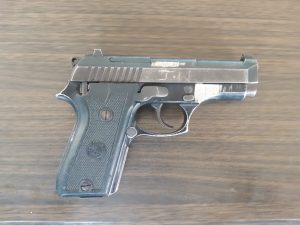 The gun that police said was used by a robber to assault and grab a caterer’s cash and valuables while she was shopping at Bourda Market.

Two men were Tuesday afternoon arrested by police minutes after one of them allegedly lashed a caterer with a handgun and robbed her while she was shopping at Bourda Market, the Guyana Police Force said.

The 42-year old woman told investigators that she was robbed of cash and other valuables  valued GYD$75,000.

The incident occurred at about 2:30 PM.

The woman reportedly told police that she was about to make a purchase at a stall in Bourda market, when the suspect approached her with a firearm and demanded her bag but he struck her when she resisted.

“She refused and the suspect thereafter dealt her a lash to her chest with the said firearm, then relieved her of her bag and ran south out of Bourda market and into a waiting motor car which was parked north on Regent Street,” police said.

The police were summoned, located the getaway car and gave chase. The lawmen said the suspect attempted to dispose of the firearm but it was retrieved by police.

The suspect and the driver of the motor car were arrested and taken to the Brickdam Police Station where they remain in custody assisting with the investigation.