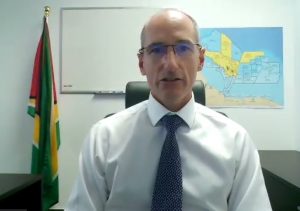 ExxonMobil on Wednesday welcomes the Guyana government’s position that it would review rather than renegotiate oil contracts as that would cause investor uncertainty.

“We have had very little discussion with the government. What they have emphasised is that they will review the contracts but they are not seeking to renegotiate the contracts and I think that’s  really important for the country for the long term because international contract sanctity is very important to all oil companies,” President of ExxonMobil Guyana, Alistair Routledge said.

He cautioned that if negotiated and settled contracts are changed that could affect investments that span 20 to 30 years. The ExxonMobil Guyana President disagreed that the Production Sharing Agreement was more in favour of the consortium under the banner of Esso Exploration and Production Guyana Limited but it is balanced.

Mr. Routledge said a contract review, while not a renegotiation, determines whether the parties are living up to their obligations and opens up the door for the government and the company to  examine other areas of collaboration especially in local content. “It identifies what it is that is not in the contract that we can work on together  and I tink local content is one of those areas where we have made a lot of progress, including initiatives like the Centre for Local Business Development,” he said.

At the same time, he cautioned that ExxonMobil might shelve investment in developing the Payara oil field which now depends on a Guyana government review before the company gives its approval called the Final Investment Decision. “If we don’t get the agreement as we are looking for in Guyana, the investment money will go elsewhere in ExxonMobil’s portfolio,” he said.

The company also boasted that it was spending more than the US$300,000 per year that is set aside for the training of government officials.

Mr. Routledge told reporters that the US$2.5 million that the company spent on training several Guyanese in Canada is a recent example of the United States (US) oil major being committed to employing more Guyanese instead of expatriates.

“We spend far more than that,” he told a media interaction in reference to Vice President Bharrat Jagdeo’s public indication that his administration wants more than US$300,000 set aside for training Guyanese.

The coalition government had managed to increase the allocation for government training and education from US$45,000 annually to US$300,000 annually to get the necessary human resources to manage the industry. Mr. Routledge said the 24 Guyanese would be “going offshore to take  highly technical roles, to run the operations, to displace expatriates from the workforce.” Mr. Routledge pledged his company’s commitment to ensuring that as many Guyanese as possible are employed at its offshore locations, onshore.

ExxonMobil, which has problems with its gas compressor aboard the Liza Destiny Floating Production, Storage and Offloading vessel, hopes to increase its production to 120,000 barrels per day by next month.

The ExxonMobil President highlighted that the less than one-month old People’s Progressive Party Civic (PPPC)-led administration has emphasised that “they would review the contracts but that they are not seeking to renegotiate the contracts.