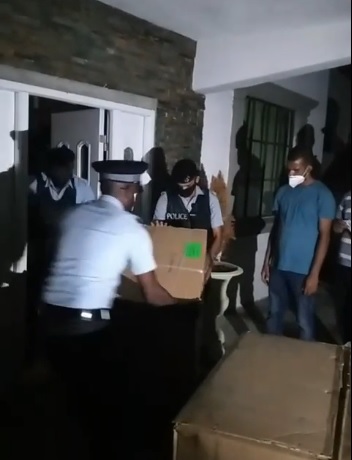 Despite a High Court order,  People’s National Congress Reform (PNCR) executive member, Christopher Jones was arrested on an allegation of simple larceny and several items connected to a barbershop that he planned to open were seized by police early Friday morning.

Mr. Jones, a former government Director Sport, was first taken by police to the Diamond Police Station and later transferred to the Brickdam Police Station where he was being questioned by investigators.

Attorney-at-Law Darren Wade told News-Talk Radio that initially the police had no search warrant but at the time of Mr. Jones’ arrest and seizure of the barbershop chairs and air conditioning unit, police had a document but did not show him or his client.

Mr. Wade said the interim High Court order was read by him to two senior police officers outside Mr. Jones’ home but they declined to accept it. He said one of them remarked “take it to the court.” The lawyer said the order was not served on Police Commissioner Nigel Hoppie but it provided for agents or servants.

Regarding the arrest of Mr. Jones as part of a probe into simple larceny, the Attorney-at-Law said “you cannot steal something from yourself” as his client followed all the rules in obtaining the more than GYD$4 million grant to purchase the items for the proposed barbershop. The funds were provided by the Ministry of Social Protection’s  Sustainable Livelihood and Entrepreneurial Development (SLED) programme.

Attorney General Anil Nandlall told News-Talk Radio / Demerara Waves Online News said the new government has a duty to recover properties of the Ministry of Social Cohesion, based on an audit report, “were identified to be at the home of Christopher Jones” and the police were dispatched to recover the items and take a statement about how they were at his premised. “The new government needs to understand where various assets of the government are located so that the current ministers where the properties of the ministries are. It’s a simple as that I don’t know how it became some confrontational,” said Mr. Nandlall.

Told that the audit report shows that Mr. Jones had properly acquired those items through the SLED programme, Mr. Nandlall said Mr. Jones could have gone to the police station and given a statement.

The Attorney General said he was unaware of  a High Court order prohibiting the search and seizure.