Govt to establish committee to look at protecting Georgetown against floods

Government plans to give serious attention to protecting Guyana’s capital city, Georgetown, from rising sea levels by establishing an inter-ministerial committee to look at developing a plan to address the issue.

This announcement was made by Minister of Local Government and Regional Development Nigel Dharamlall who said that it is the view and mandate of the new government that they will have to work towards protecting Georgetown from floods.

“The Ministry of Local Government and Regional Development will establish an inter-ministerial committee that will work very closely with the residents of Georgetown and the councillors too, to make sure that that elevation happens very soon, and that it happens in the best interest of national development,” he explained.

Georgetown Mayor Ubraj Narine told News Talk Radio 103.1 FM/Demerara Waves Online on Tuesday that he welcomes the decision to set up the committee and looks forward to seeing members of his council included in the plan.

“We discussed numerous matters during a courtesy call yesterday, and that was one of the issues we looked at. Anything to do with the city, I welcome it and look forward to seeing it materialise. It was the first courtesy call, so I await to see the outcome of these talks,” he added.

Mr Dharamlall said he is committed to forming a renewed relationship with the Mayor and City Council of Georgetown and looks forward to working more closely.

Georgetown is prone to flooding and relies on seawalls for protection. When flooding occurs due to overtopping of seawalls or heavy rains, sluice gates open for drainage. However, these gravity-fed gates can do so only when the tide is low enough.

A few years ago, Dutch civil engineer Adrianus Vlugman had recommended that Guyana move its capital inland to higher ground or invest more heavily in coastal infrastructure to withstand future sea level rises. But former Guyana lead negotiator to the United Nations climate change convention, Andrew Bishop said it would be difficult to relocate Georgetown inland. Instead, the government in recent years has moved to update its sea defence and disaster risk management policies and planning. 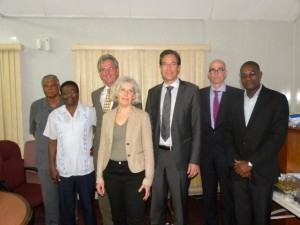 FLASHBACK: Minister of Public Infrastructure, David Patterson (at left) with members of the Dutch Risk Reduction team in November, 2015.

A Dutch Risk Reduction Team (DRR-Team) visited Guyana in 2015 and spent days analysing Guyana’s drainage system in and around Georgetown. The DRR-Team said then that the poor drainage system in the capital city must be tackled from the planning stage right up to the enforcement of legislation.

The DRR-Team made seven recommendations, including an upgrade of the modelling and data management capability, increase flood resilience of people and businesses, upgrade dredging capabilities, and development of long-term plans. It emphasised the need for an integrated approach, both at the technical and management level.

In late 2019, Vice President Bharrat Jagdeo, who led a Commonwealth Expert Group on Climate Finance back in 2013, had said that concrete drains need to be built across the country, particularly in Georgetown. He suggested that revenues from the oil and gas sector can be used to facilitate that. Mr Jagdeo did not rule out relocating Georgetown and the coastal region, but has indicated that this will have to be done gradually.