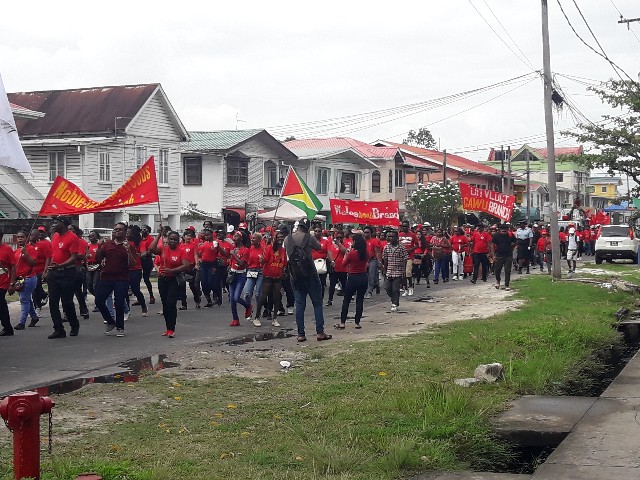 A section of workers marching through the streets of Georgetown on May Day, 2019.

The Guyana Trades Union Congress (GTUC) on Tuesday welcomed the re-establishment of a Ministry of Labour and has already urged Minister of Labour Joseph Hamilton to tackle several burning issues.

“We look forward to a good, meaningful, and productive working relationship with the Minister. Now that we have a return of a ministry it is therefore our expectation that the ministry will continue in accordance with the established norms,” the GTUC said.

The remarks were made by GTUC representatives in a meeting with Mr Hamilton. The labour confederation also urged him to stick to established norms such as embracing the various declarations and conventions of the United Nations and the International Labour Organisation (ILO) as well as Guyana’s Constitution to ensure that the labour force is best served.

The GTUC called on Labour Minister Hamilton to create an industrial tribunal or court to address issues in the public and private sectors, restore agency shops across the public sector, and formulate a job creation plan.

The trades union body also wants the Ministry of Labour to establish an arbitration panel to resolve the impasse between the Bauxite Company of Guyana Incorporated (BCGI) and the Guyana Bauxite and General Workers Union (GB&GWU). More than 400 workers have been dismissed by the Russian Aluminium (RUSAL)-controlled BCGI, the last being just over 300 in recent months after workers blocked the Upper Demerara river to defend their jobs and working conditions. The company has since packed up and left Guyana.

Neither the former People’s Progressive Party (PPP) administration nor the recently defeated A Partnership for National Unity+Alliance For Change (APNU+AFC) administration had successfully blocked the dismissal of workers or secured their reinstatement.

Also high on the GTUC’s agenda is the need to revisit the Trade Union Recognition Act with the aim of restricting the Board and the determination of recognition consistent with the recommendations from the ILO.

“These are issues that the GTUC over the years has been advocating for. These things are the very heart of labour and industrial relations,” the GTUC said.

The GTUC remains split for several decades with a mere handful of affiliates while the bulk falls under the umbrella of the People’s Progressive Party (PPP)-leaning Federation of Independent Trades Unions of Guyana (FITUG). FITUG affiliates include the Guyana Agricultural and General Workers Union (GAWU), National Association of Agricultural, Commercial and Industrial Employees (NAACIE) and the Guyana Labour Union (GLU).