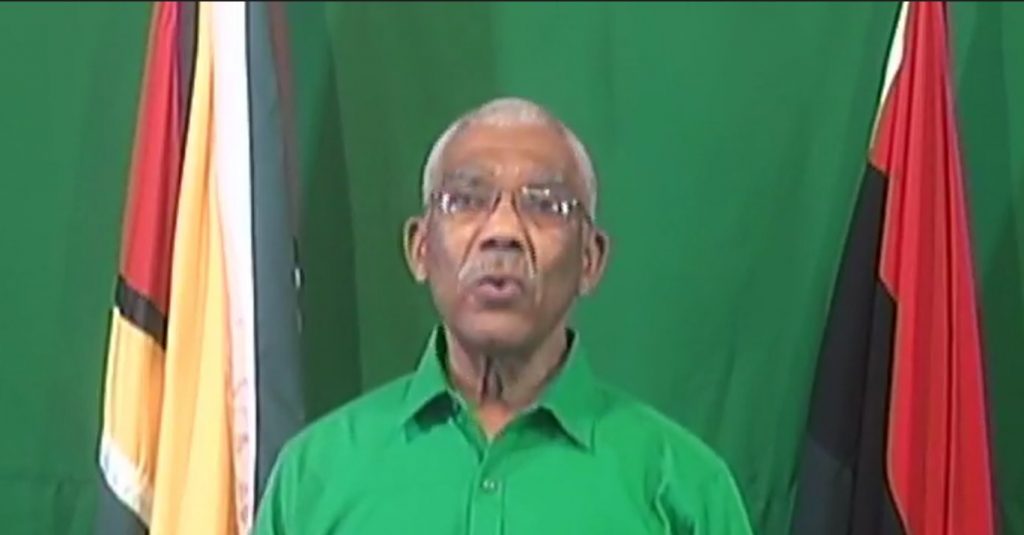 Leader of the People’s National Congress Reform, David Granger this morning warned the Irfan Ali-led administration that it would have to bear full responsibility for virtually evicting former ministers from government quarters, locking out public servants threatening contracted workers with dismissal.

“The People’s National Congress warns the People’s Progressive Party to desist from pursuing this dangerous pattern of aggression against officials, members of society and persons perceived to belong to other political parties. The PPP will bear responsibility for the consequences of its conduct,” he said in a less than 30-minute address on his coalition’s Facebook page.

Those being targeted are said to include a number of drivers, administrators as well as political aides in the Ministry of the Presidency. Among them are Frederick Mc Wilfred, Ronald Backer and Astell Collins. Former Ministers told by the Clerk of the National Assembly to leave within 36 hours  include Ms. Simona Broomes,  Ms. Valarie Adams, Dr. Karen Cummings,  Mr. Hemraj Rajkumar and Mr. Sidney Allicock.

The ministers were reportedly given 36 hours to vacate their places of residence, In one instance, the former Head of the Department of Public Information (DPI), Imran Khan was asked to vacate the house at Echilibar Villas, Stone Avenue, Campbellville  immediately

Mr. Granger said the general situation in Guyana has already started to deteriorate in less than one week after President Dr. Irfaan Ali was declared winner of the March 2, 2020 general and regional elections. “An atmosphere of fear and loathing has enveloped the nation. This should not be expected after elections in our country,” he said. The PNCR Leader also recalled the violence unleashed by PPP hooligans against innocent school children travelling in a school bus at Bath Settlement in the Mahaica-Berbice Region on Friday 6th March in the wake of the elections.

Again staying clear of acknowledging that APNU+AFC was defeated in the general and regional elections, he instead restated that the PNC has placed on record its “ acknowledgement of the lawful consequences” of the declaration by the Chairman of the Guyana Elections Commission (GECOM) Retired Justice Claudette Singh that the PPP won the elections.

At the same time, the PNCR Leader said his party maintained that the the Report by the Chief Elections Officer, Keith Lowenfield as ordered by the Court to be presented to the Commission contained significant anomalies and irregularities. The former Guyanese leader restated that there were numerous abuses, anomalies and irregularities in the poll and the appeals which were made to the courts, consequently, for the validation of the elections, during this period.

“The PNC repeats its assertion that fraudulent votes should not have been held to represent the will of the electorate. The inclusion of fraudulent votes in a ‘Declaration’ constitutes a violation of the fundamental principles of democracy. We maintain that the Elections Commission should have made a ‘Declaration’ based only on valid votes,” he said.

Highlighting that the national vote recount was aimed at highlighting the number and quality of votes cast, he said that process produced a flawed Report and the PNC would continue its campaign to ensure that the votes of all Guyanese are accurately recorded, tallied and reported.

He said the PNC, in the national interest, and with a view to preserving peace and maintaining order, has acted responsibly throughout this prolonged political crisis.

“We implore all Guyanese to remain calm and peaceful,” he added, even as he repeated that his party would challenge the results through an elections petition.

The PNC will challenge the declared results lawfully. We urge our members, supporters and friends – who have been patient throughout our campaign and the post-elections process – to continue to conduct themselves in a lawful and peaceful manner.