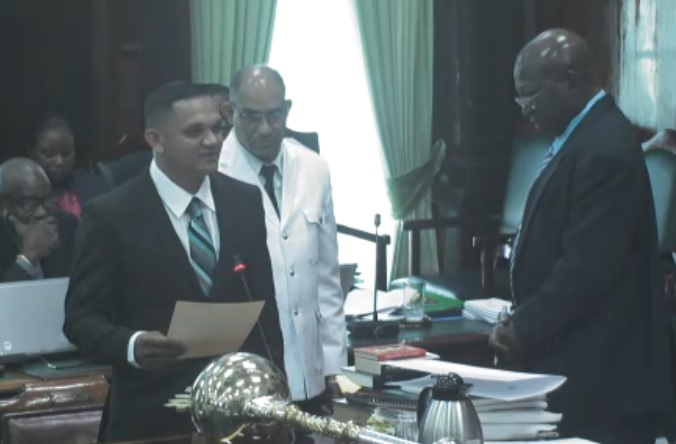 One year after the Guyana Forestry Commission (GFC) made it public that it was finding it difficult to pay staff due to several financial difficulties, the commission has indicated this same position to the newly-appointed Minister of Natural Resources Mr. Vickram Bharrat.

Mr. Bharrat had his first meeting on Thursday with the heads of various agencies under his ministry, including Acting Commissioner of the GFC, Mr. Gavin Agard where this information was shared.

“The Guyana Forestry Commission (GFC) is presently unable to pay salaries for July and owes millions to the utility companies. It was also pointed out that major restructuring is needed to ensure these agencies function in a more effective manner,” the ministry said in a statement.

Former chairperson of GFC, Jocelyn Dow during a media engagement in mid-2019 had revealed that the GFC had to depend on raising monies from acreage and other stewardship activities, and that it was falling short by up to $1B annually to effectively carry out its function. Dow had even appealed for funding to help its operations.

Mr. Bharrat Jagdeo, while Opposition Leader, had used the opportunity to criticise the coalition, stating that the then government was bankrupting institutions.

“I suspect there are other motives behind the restructuring but the staff needs to be paid and they have to stop bleeding the GFC. This government is totally hopeless. Not only this is going to happen but almost everything is going to be bankrupt. They just need a little more time,” he was quoted during his previous weekly press conference.

The new minister said Wednesday following his appointment that the PPP had received reports that that sector is in a terrible state, and staff at the GFC have not received payment in months. “That is something that I will look at because especially when we are going through a crisis as we are right now with the pandemic, that is very unfair to the some 400 staff at GFC,” he added.

The GFC is responsible for advising the subject minister on issues relating to forest policy, forestry laws and regulations. The commission is also responsible for the administration and management of all state forest land.

Meanwhile, during the meeting held at the Ministry’s Duke Street Kingston, Georgetown office, the managers for the various other agencies provided a grim report which points to “gross mismanagement of the sector under the previous administration,” the ministry’s statement added.

Permanent Secretary of the ministry, Mr. Joslyn McKenzie; Commissioner of the Guyana Geology and Mines Commission (GGMC), Mr. Newell Dennison; and General Manager of the Guyana Gold Board, Ms. Eondrene Thompson was all in attendance at that meeting.

The minister will be meeting with the management team and staff of these agencies shortly.