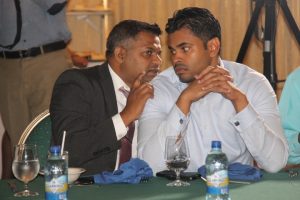 Head of Petroleum at the Georgetown Chamber of Commerce Charles Ramson (right) and then President of the Chamber, Deodat Indar. (FILE PICTURE)

President Dr. Irfaan Ali swore in 19 more ministers including  Minister of Natural Resources, Vickram Bharrat who would be responsible for the oil sector, even as Attorney-at-Law Charles Ramson, who holds Masters  Degree in Oil and Gas, said he was not disappointed that he was appointed Minister of Youth and Sport.

Mr. Bharrat is a Computer Scientist, Public Management specialist and teacher who had replaced Ramson as a backbencher when he had decided to take up a British scholarship to pursue the Masters Degree. Mr. Bharrat is expected to be responsible for mining and forestry.

Minister Bharrat is scheduled to meet with the Permanent Secretary of the Ministry of  Natural Resources and a number of technical staff members on Thursday before meeting with the heads of department.

He said the future of the Department of Energy at the Office of the President is also down for discussions in the coming days.

In responding to questions about whether he was disappointed, Mr. Ramson said the President believed that “the most important resource is not oil and gas; it’s the people of Guyana” 60 percent of whose population is below 35 years old. “As far as being able to provide young leadership of this country for which there is a strong voice both the President as well as the party felt as though this was the best role for me and that no one else would be able to do it so I am not disappointed,” Ramson told News-Talk Radio 103.1 FM / Demerara Waves even as he acknowledged that he had been writing a lot about oil and gas. Ramson was Head of Petroleum at the Georgetown Chamber of Commerce when Mr. Deodat Indar was Chamber. Mr. Indar is now Junior Minister of Public Works.

Then President David Granger had taken over the oil sector from then Minister of Natural Resources, Raphael Trotman and set up a Department of Energy in the Ministry of the Presidency with Dr. Mark Bynoe as its Head. Mr. Granger had promised to set up a full-fledged Ministry of Energy had he won the 2020 general and regional elections.

At Wednesday’s swearing in of 19 more ministers, the President said more ministerial appointments are expected soon and responsibilities for appointed ministers would be published in the Official Gazette by Friday.

Mr. Ramson said over the past five years, Guyana has had no leadership in the area of youth and sport and a “mediocre type of culture” leadership, but now that is now expected to change to transform and unite Guyanese. Mr. Ramson said he was “elated” to put his experience and contacts in sport to work “to help with reaching out that divide.”

The Minister of Youth, Sport and Culture, nevertheless, hoped to advocate for the use of oil and gas resources for youths.

President Ali indicated that he would be responsible for certain sectors for which no minister has been appointed and Vice President Bharrat Jagdeo would be playing a key role in managing the finance sector. “Once a minister has not been appointed as yet, of course, the President has responsibility for that sector and with the skill-set that we have at the moment in the Office of the President with the former President (Bharrat Jagdeo) there, we are hoping to move quickly on a number of issues at the financial level but it is an area we are still searching for potential candidates,” Dr. Ali said. He side-stepped answering directly whether Dr. Ashni Singh would return to once again head the Finance Ministry, saying that he has not among those so far been contacted.

Prime Minister, Retired Brigadier Mark Phillips, who had spoken about the need for an integrated approach to tackle crime, is not the new Minister of Home Affairs (Public Security) as that sizeable portfolio has been handed to Robeson Benn, a geologist by profession. But the President Mr. Phillips would be handed a “weighty” portfolio. “The Prime Minister would have a portfolio that would be weighty, that is what I would say to you,  (he would have) a very important portfolio of responsibility and also he would be working with me on a number of projects and issues,” the President said.