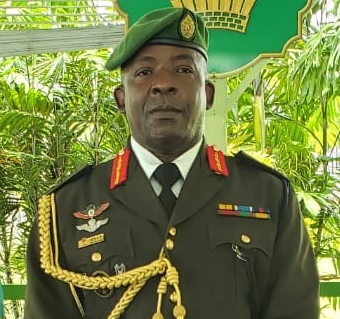 Just over one month after Brigadier Godfrey Bess was appointed acting Chief of Staff of the Guyana Defence Force by then President David Granger, he on Monday directed officers and ranks to respect Dr. Irfaan Ali as the democratically elected President and Commander-in-Chief of the Armed Forces.

“As Chief-of-Staff (Acting), I pledge the Guyana Defence Force loyalty to the Constitution of Guyana and the democratically elected government to be led by our Minister of Defence and Commander-in-Chief , President Dr. Irfaan Ali,” he said in a Command Directive also posted on the GDF’s Facebook page.

Brigadier Bess said  all members of the army are “subjected to the new Commander-in-Chief’s directives”. Brigadier Bess said the army “would remain an apolitical national institution and, therefore, would continue to uphold its noble and exemplary position of service to the Guyanese nation and all our people.”

The GDF Chief-of-Staff said he would be committing the resources of the army to the State under the guidance of the Minister of Defence and Commander-in-Chief. Dr. Ali was sworn in Sunday afternoon as Guyana’s ninth Executive President shortly after he was declared the winner of the March 2, 2020 general and regional elections by the Chairman of the Guyana Elections Commission (GECOM), Retired Justice Claudette Singh.

Brigadier Bess reiterated the GDF’s mandate to deter aggression, defend Guyana’s sovereignty and ensure its development as a safe and secure place.

On July 1, 2020 the Chief-of -Staff was promoted from Colonel to Brigadier and appointed acting Chief-of-Staff. He told reporters then that “we are trained to support the democratically elected government of the day based on our constitution and that we will continue to do.”

The Chief Elections Officer, Mr. Keith Lowenfield and the now opposition A Partnership for National Unity+Alliance For Change (APNU+AFC) have said the results from the national vote recount do not reflect the will of Guyanese at the polls due to alleged voter impersonation, irregularities and anomalies. Mr. Granger has announced that the declared results would be challenged in an election petition to the High Court.