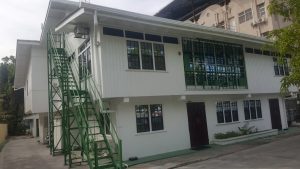 The headquarters of National Industrial Commercial and Investments Limited.

As time draws closer for the Guyana Sugar Corporation (GuySuCo) to deliver on its monthly payment to workers, the corporation says it is unclear whether they will be able to honour its obligations.

GuySuCo’s Corporate Communications Manager Audreyanna Thomas says the corporation has for weeks been waiting on the disbursement of $750 million the National Industrial and Commercial Investments Limited (NICIL) to pay wages and purchase supplies to sustain the business.

When News Talk Radio 103.1 FM/Demerara Waves Online spoke to Thomas on Friday, she said no payment has so far been made.

“It is worrying because, if we don’t get that payment, we will not be able to honour payments to workers which they are due to receive on July 29, 2020,” the manager added. Also of concern to the GuySuCo management team, is the fact that a shipment of sugar is due in three weeks in August.

“If we don’t deliver, we stand the chance to lose our market. We run a serious business. And all the talk that GuySuCo is not managing well, people don’t understand the scale of our business and why we have developed a five year business plan to help turn things around,” she added.

Thomas revealed that if that tranche of money is not delivered, then it also poses a challenge for GuySuCo to obtain chemicals and guaranteeing a crop for next year. According to her, the implications are far-reaching and NICIL will need to deliver in order for the corporation to continue its business.

Guyana Agricultural and General Workers Union (GAWU) General Secretary Seepaul Narine had told News Talk Radio 103.1 FM/Demerara Waves Online earlier this week that the disbursement of funds should have happened a long time ago and his union was afraid that workers would have to take strike action over non-payment.

Narine noted that these could have certain implications for the local sugar industry.

Contact was made with Head of NICIL Colvin Heath-London who explained that he was not aware of the accounting process and he does not handle these payments “personally.” He had committed to check with the Special Purpose Unitt (SPU) to follow up on the process. He did not give a commitment whether these funds will be disbursed.

Despite its downsizing GuySuCo remains one of the largest businesses in Guyana which has contractual obligations to markets locally, regionally and internationally. The corporation currently employees over 8000 people at the remaining sugar estates. It also pays pension to some 6000 people.

The SPU has disbursed $9.7 billion to GuySuCo from the $30 billion that was secured for the industry by NICIL.