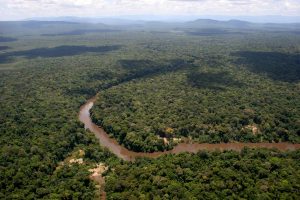 Iwokrama International Centre for Rainforest Conservation and Development (IICRCD) said it would be joining with the Guyana Police Force and other State agencies to crack down on the illegal movement of foreigners through that rainforest concession in the Rupununi Region to help curb the coronavirus.

“We will be working with these authorities to ban these vehicles from passing through the Iwokrama Forest for at least three months in the first instance,” the Centre said in a statement. The IICRD said the Ministries of Health and Citizenship would also be taking action as well so that those passengers and traffickers would be dealt with to the full extent of the law. “Further infractions will lead to more draconian action including a permanent ban of such vehicles from entering the Iwokrama Forest.”

The IICRD urged transporters of people, mainly Brazilians, to be careful because of the severe outbreak of the deadly coronavirus, COVID-19, in Brazil and the fact that it has already spread to several communities in the Rupununi. “COVID19 health situation is very serious and Iwokrama Management is requesting that transport providers be very careful and that they pay attention to the situation at hand. There is a upsurge of cases now in the Rupununi and most of these are linked to persons crossing the border,” the Centre added.

Iwokrama said it has teamed up with the Guyana Police Force and the Ministry of Health to closely monitor all vehicles passing through the forest to find road users that are complicit in acts of bringing illegal persons through the Iwokrama Forest or engaging in any other illegal activity, we

The threat to ban vehicles comes as Iwokrama has been informed that on June 13, two buses passed with groups of aliens who most likely came from Brazil and this was reported to us. On July 6, 2020 Iwokrama said at its ranger station at  Corkwood, the police found  three illegal Brazilians on a bus and the bus was turned back and the illegals were dropped off at Oasis restaurant and the bus turned back and continued to Georgetown.

The Centre said it has information about the two buses including one of the drivers.

The IICRD said vehicles have since sought to develop a “secret way” to  bypass the Corkwood ranger station and Kurupukari. The centre said two persons- on e Brazilian and the other Guyanese- were caught coming leaving one of those trails. “They were handed over to police and the Brazilian has since been deported. Investigations are continuing on the detained Guyanese to assess whether or not he is a trafficker or guide,” police said.

“Iwokrama management is taking this situation very seriously as trafficking of illegal persons is criminal and poses a serious health risk to community residents but also residents of Georgetown and further afield,” the centre said.

The Iwokrama International Centre (IIC) was established in 1996 under a joint mandate from the Government of Guyana and the Commonwealth Secretariat to manage the Iwokrama forest, a unique reserve of 371,000 hectares of rainforest “in a manner that will lead to lasting ecological, economic and social benefits to the people of Guyana and to the world in general”.

2020-07-17
Denis Chabrol
Previous: Contractor gunned down at worksite
Next: UK planning “consequences” for Guyana if national vote recount is not used