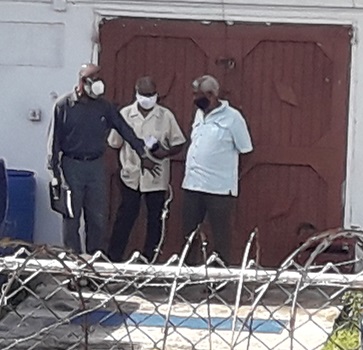 The three pro-APNU+AFC commissioners Vincent Alexander, Charles Corbin and Desmond Trotman in a conversation shortly after their Commission meeting on Monday, 13th July, 2020.

The Chairman of the Guyana Elections Commission (GECOM), Retired Justice Claudette Singh on Monday set aside the 10 district declarations and ordered that Chief Elections Officer, Mr. Keith Lowenfield a third time to submit a report using figures from the national vote recount- the only figures now available.

GECOM spokeswoman, Yolanda Ward confirmed that this decision was made, although two pro-coalition Election Commissioners did not say so definitively.

Pro-People’s Progressive Party (PPP) Elections Commissioner, Sase Gunraj said the GECOM Chairman scrapped the 10 declarations. “She proceeded to say that the March 13 declaration which included the fraudulent declaration by the Returning Officer of Region Four has been set aside and replaced by the recount tabulation certificates. That, I believe, is an important finding and ruling of the Chairman,” he said.

In light of the Chief Elections Officer refusal twice to comply with her request to use the recount data, Mr. Gunraj said the role of the Chief Elections Officer is not higher than that of the Commission and “as a consequence the commission is not subservient to the CEO.” “She reminded the CEO has the responsibilities, answerable to and as a consequence mist follow the dictates of the Commission,” he said.

Unofficially, the recount data show that of the 460,352 valid votes cast, the incumbent A Partnership for National Unity+Alliance For Change (APNU+AFC) has won 217,920 and the People’s Progressive Party 233,336. The three ‘joinder’ parties- A New and United Guyana (ANUG), Liberty and Justice Party (LJP) and The New Movement (TNM) got a total of 5,214‬ votes.

Mr. Gunraj said the GECOM Chairman stated that the Guyana Court of Appeal did not set aside Order 60 whatsoever.

Guyana’s constitution prohibits decisions by the Elections Commission from being enquired into by any court. That is with the exception of an election petition to the High Court to challenge the declared results.

Already, the regional court states in its judgement that “It is after such invalid votes are weeded out that the remaining “valid votes” count towards a determination of not only the members of the National Assembly but, incidentally as well, the various listed Presidential
candidates. If the integrity of a ballot, or the manner in which a vote was procured, is questioned beyond this validation exercise, say because of some fundamental irregularity such as those alleged by Mr (Joseph) Harmon, then that would be a matter that must be pursued through Article 163 after the elections have been concluded.”