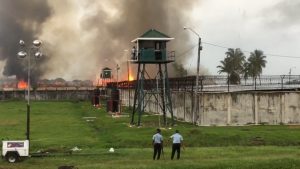 Several inmates of the Lusignan Prison, East Coast Demerara, were Sunday injured in a fire that destroyed one of the buildings, fire service and police officials said.

Fire Chief Marlon Gentle said no one was killed but eight inmates sustained minor injuries including burns and abrasions as well as smoke inhalation.

He said none of the prisoners escaped from that minimum security penitentiary. He said the injured were being treated.

Soldiers were called out to support police in cordoning off the area to minimize the chances of anyone escaping.

The Guyana Defence (GDF) deployed its helicopter with members of the Special Weapons and Tactics (SWAT) Unit aboard. They frequently conducted aerial reconnaissance over the now abandoned, thickly vegetated sugarcane fields and other areas.

The Guyana Police Force said the fire stemmed from the discovery of narcotics at about about 12:45pm at the Lusignan Prison and the subsequent activation of a search by an investigative team.

“Some prisoners from the same facility began rioting,” police said.

The police force said Joint Services ranks were able to contain the riot and escort most prisoners from the Lusignan Prison to nearby facilities.

“The situation is contained at this time and logistics and other systems are being implemented,” police added.