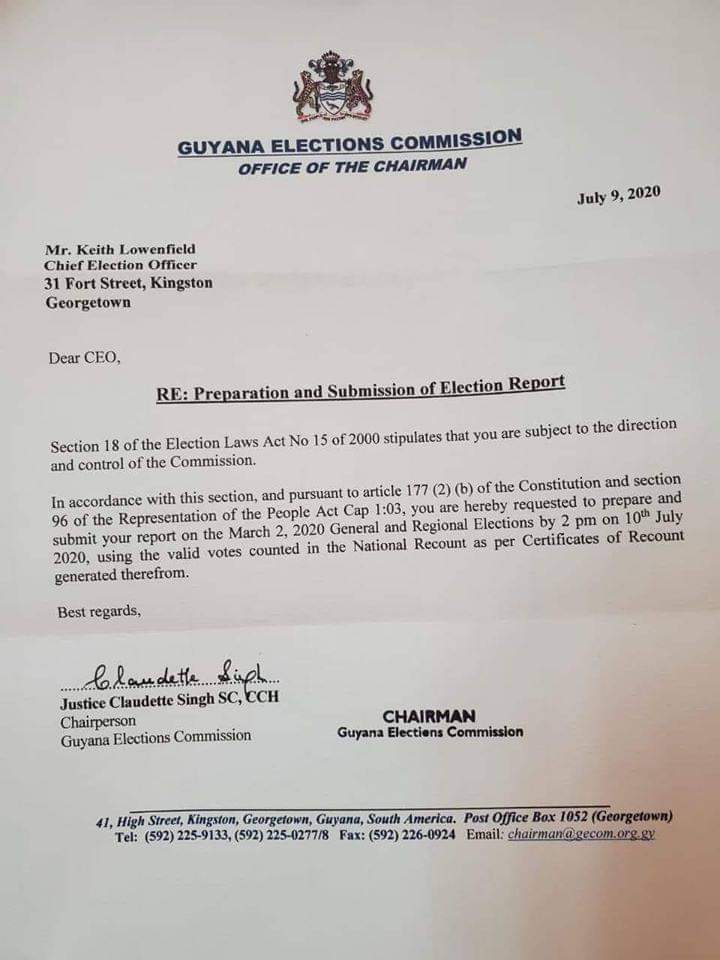 The Chairman of the Guyana Elections Commission (GECOM), Retired Justice Claudette Singh on Thursday instructed Chief Elections Officer, Keith Lowenfield to present a report based on the results from the national vote recount including the certified district results.

Quoting the Election Laws Act, that “you are subject to the direction and control of the Elections Commission,”  she asked him to prepare and submit his report on the March 2, 2020 general and regional elections by 2 PM, 10th July, 2020 “using the valid votes counted in the National Recount as per certificates of recount generated therefrom.”

GECOM spokeswoman, Yolanda Ward confirmed that that letter was sent by the Commission Chairman to the Chief Election Officer.

The seven-member commission is expected to meet on Friday at 1 PM.

It is unclear whether anyone will file fresh court action to stop the Chief Elections Officer from submitting a new report or challenge its contents.

Ms. Singh’s request for a fresh report was dispatched one day after the Caribbean Court of Justice (CCJ) invalidated his report that subtracted 115,000 votes and gave the David Granger-led coalition of A Partnership for National Unity+Alliance For Change (APNU+AFC) a one-seat majority to retain power in the 65-seat National Assembly.

Mr. Lowenfield had based that report on  what he had termed “guidance” by the Guyana Court of Appeal in its ruling that “more votes cast’ means “more valid votes cast” in the context of the gazetted recount order  number 60 that required reconciliation of votes cast with voters’ lists, stubs and counterfoils and other statutory documents.

If the Chief Elections Officer does not subtract the 115,000 votes on his report on Friday, it would mean that the People’s Progressive Party (PPP) would be declared the winner of the elections

The CCJ, in its decision, stated that “valid votes” can only mean what is stated in the Representation of the People Act and must be used as the basis for declaring a winner after which anyone aggrieved must challenge the result by way of an election petition in the High Court.

The United States, United Kingdom, Canada, European Union, France, Norway, Caribbean Community, and the Organisation of American States have said the recounted votes reflect the will of Guyanese at the general and regional elections held more than four months ago.