Some North-West residents do not believe COVID-19 is real 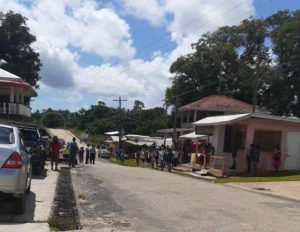 Moruca residents protesting against the lockdown of their community and claiming that COVID-19 is not real.

By Samuel Sukhnandan
Despite a steady increase in COVID-19 cases in Barima-Waini (Region 1) and the recent lockdown imposed by the authorities,
residents of Santa Rosa took to the streets on Tuesday to protest the decision, while simultaneously voicing their disbelief.

Reports are that some of the protestors think that the lockdown is too stringent and that COVID-19 is not real.

Regional Chairman Brentnol Ashley confirmed this with NewsTalk Radio saying that the disbelief among residents stem from the fact that most persons  tested positive so far with COVID-19 in the region are asymptomatic.

While a team was dispatched by the Public Health Ministry over the weekend to assist with mass testing, the regional official feels that more effort should also be placed on educating residents on the dreaded pandemic.

While non-profit organisations like the Amerindian People’s Association are engaged in the distribution of face masks to some communities, Ashley said that  this might not be enough to get the message through to the people.

A task force headed by the Regional Executive Officer of Region One has been set up to deal with those issues.

Ashley explained that residents are worried that the lockdown will also cause them to face economic hardships especially  since many of them depend heavily on farming agricultural produce.

“Many people depend on farming here. In Kamwatta, they’re not being allowed to go to do their business. They are given a hand band to go to their farms I was told,  and it’s for one time use…Cargo boats are not allowed to come into Santa Rosa and that creates a problem,” he explained.

The village of Santa Rosa has seen a huge increase in COVID-19 cases over the past week. The village went on total lockdown on Saturday, July 5.

To date, Guyana currently has 273 confirmed cases of COVID-19, with 15 deaths recorded so far.

Meanwhile, police denied permitting the protest at M0ruca. The Guyana Police Force said Region One (Barima-Waini) Commander, Senior Superintendent Wendell Blanhum spoke directly to one of the alleged organisers and informed her that no such permission could be granted in light of the COVID -19 restrictions that are currently in force.

“In spite of permission not granted, the said organiser along with a group of persons assembled at Moruca at approximately 09:00h bearing placards with a view of protesting,” police said.

The protesters, according to police, informed the protesters that permission was not granted for them to engage in such activity and that they were in breach of the COVID 19 guidelines.  After issuing the said warning, police said the persons assembled indicated that they wanted to meet with the Toshao and having done so, the crowd dispersed.