Three Guyanese on station bail for border breach; Brazilians escorted back to homeland 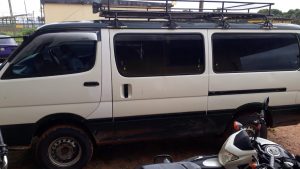 The bus that police said was caught at an illegal Guyana-Brazil crossing in Lethem with the Brazilians who entered the country illegally.

Three Guyanese are on station bail in connection with their failed attempt to transportation of nine Brazilians from Brazil to Guyana’s coast.

Police say the Brazilians were returned to Bon Fim.

They were allegedly caught at Sand Pit illegal crossing, Takatu River yesterday at about 6:30 PM.

The Guyana government has closed all ports of entry in order to curb the importation  of coronavirus into Guyana. Tens of thousands of Brazilians have died from the disease.

Investigators say the driver admitted that Andra  hired him to pick up the Brazilians.

He says they were hoping to transport them to Georgetown.

Guyanese police escorted the nine Brazilians to Bon Fim, Brazil and handed them over to the Federal Police.

The minibus was escorted and lodged at Lethem Police Station.

Monohar, Viera and  Andra were placed in custody pending investigation and were later sent away on cash bail.