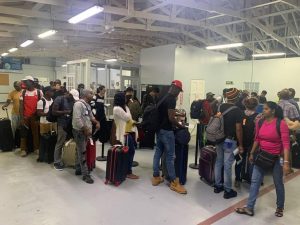 Six  privately-owned airlines are being considered to link Guyana with the numerous scattered Caribbean islands as the several Caribbean shareholder governments say they are broke and can no longer afford to pump money into the ailing LIAT (1974) Ltd.

LIAT’s board has decided to ground the decades-old regional carrier and separate assets from liabilities because of insolvency. The financial situation has worsened because the airline has been grounded for several weeks now due to the fact that most Caribbean countries have closed their airports due to COVID-19.

Addressing the opening of the summit of CARICOM leaders, St. Vincent and the Grenadines Prime Minister, Dr. Ralph Gonsalves who is responsible regional transportation in the quasi-cabinet is confident that several airlines will be able to provide cheap and safe air travel…

“I believe that we are going to be able to provide, in a very short time, a sufficiency of regional transport to serve the sub-region, to serve ourselves safely, reliably, sustainably, and reasonably priced. I want to give that assurance to the people of the Caribbean Community,” he said in receiving the chairmanship of CARICOM from Barbados’ Prime Minister, Mia Mottley.

Gonsalves and Mottley said several airlines would fill the gap left by LIAT. They include the Trinidad and Tobago government-owned Caribbean Airlines, The Turks and Caicos-based Inter-Caribbean, One Caribbean in St. Vincent and the Grenadines, SVG Air, United States-based Silva, and the France based Air Antille.

Against the background of Antigua and Barbuda’s Prime Minister, Gaston Browne reportedly boycotting the CARICOM summit because LIAT is being closed down, Ms. Mottley says there is no other lawful choice. “The Board of Directors, because of the heavy debt  which AT has been carrying, not now, but for many, many years has indicated to us that it is no longer possible to trade as LIAT (1974) Ltd and that in truth and in fact, that the company is effectively insolvent and that it needs liquidation,” she said.

An Attorney-at-Law by profession, the Barbados Prime Minister noted that if the insolvent company was kept in operation, “directors will be guilty of fraudulent trading.”  “To that extent, as shareholder governments, we have had to respond simply because to do otherwise would mean providing a level of funding that we simply do not have in the affairs of our community and in the affairs of our nations,” Mottley added.

Antigua and Barbuda’s Prime Minister, Gaston Browne has said his already cash-strapped country, struggling every month to pay salaries and pensions on time,  was willing to invest at least US$20 million into LIAT. The airline owes its staff UIS$70 million in severance and holiday payment

The Vincentian Prime Minister, who denied he or any of his family members being a shareholder in One Caribbean, noted that that carrier has two 30-seater SAABs, Swedish twin-engine turboprop aircraft, and and one 19-seater.

LIAT (1974) had served from Guyana in the south to the British Virgin Islands.

2020-07-03
Denis Chabrol
Previous: Govt shuts down mining, blocks movement in parts of Regions 1 and 7 as COVID-19 cases rise
Next: Mining lockdown only in Moruca, Aranka as COVID-19 spikes- miners association