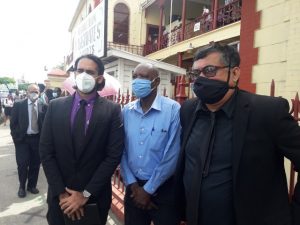 Chief Elections Officer, Keith Lowenfield on Friday morning failed to turn up at court to answer private criminal charges filed against him.

Prosecutor, Attorney-at-Law, Glen Hanoman told the court that it appears that Lowenfield has been evading service of the charges of misconduct in public office and alleged electoral fraud.

Outside the courtroom, Hanoman told reporters that Lowenfield’s apparent avoidance was sending a bad signal about his alleged involvement.

Meanwhile, Morean filed a third charge against Lowenfield on Friday, saying that he allegedly conspired with Region Four Returning Officer Clairmont Mingo to alter results that had been declared in March for that district.

Kanhai alleges, in his earlier charge against Lowenefield, that between March 5 and June 23, he “conspired with person (s) unknown to commit the common law offence of fraud, to wit, by representing to the Guyana Elections Commission that tables attached to his elections report dated 23rd June, 2020 accurately reflected the true results of the said election, in order to materially alter the results of the said election, with intent with intent to defraud knowing the said tabulation to be  false.”

Particulars of the offence of misconduct in public office are that between March and June 29, 2020 Lowenfield “without lawful excuse or justification, wilfully misconducted himself” by ascertaining results of the March 2, 2020 general and regional elections “knowing the said results to be false, the said wilful misconduct amounting to a breach of the public’s trust in the office of the Chief Elections Officer.”