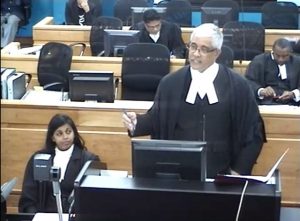 Lawyers for the People’s Progressive Party and a supporter of A Partnership for National Unity+Alliance For Change (APNU+AFC) on Wednesday laid out their arguments on whether the Caribbean Court of Justice (CCJ has jurisdiction to hear an appeal of a Guyana Court of Appeal decision on the question of valid votes.

The CCJ said it would now study the submissions by the several lawyers and give a decision next week Wednesday , July 8 at 3 PM.

Attorney-at-Law, John Jeremie, for APNU+AFC respondent Eslyn David maintained that the regional court does not have jurisdiction to hear the appeal because the Guyana constitution and the CCJ Act prohibit this. Jeremie further argued that even if the Guyana Court of Appeal is wrong, the CCJ could not hear an appeal. “The court has no jurisdiction to determine the matter…to determine whether that supreme court was wrong,” he said.

Senior Counsel, Douglas Mendes, for PPP General Secretary Bharrat Jagdeo and presidential candidate, Dr. Irfaan Ally conceded that the CCJ does not have jurisdiction to hear the appeal but to quash the case altogether because the Guyana Court of Appeal had no jurisdiction in the first place. He stressed that Article 177(4) was applicable only to someone who had already been elected president.

The lawyer for Jagdeo and Ally wants the CCJ to allow the appeal to that Trinidad-headquartered court, that the matter before the Guyana Court of Appeal is dismissed.

Mendes also wants the CCJ to issue a consequential order requiring the Chief Elections Officer to withdraw his report to the Guyana Elections Commission (GECOM) and declare the result on the basis of the recount.

Queen’s Counsel, Justin Simon,in association with Attorney General, Senior Counsel Basil Williams, said based on the CCJ’s interpretation of Article 177(4) of Guyana’s constitution would have determine whether it has a residual jurisdiction. At the same time, he said the Guyana Court of Appeal enjoys jurisdiction to interpret the Constitution. “Give a liberal interpretation…,”

Attorney General Williams  said the Guyana Court of Appeal has exclusive jurisdiction to deal with matters concerning the election of the President and the High Court deals with the election of members of the National Assembly.

Attorney-at-Law Reginald Armour, for APNU+AFC’s Joseph Harmon, also argued that the CCJ did not have jurisdiction.