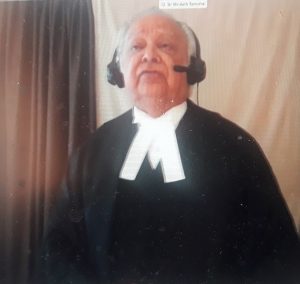 The International Court of Justice (ICJ), also known as the World Court, on Tuesday gave Guyana time to answer a question after hearing hours of submissions on why it believes that court has a legal right to hear a case to settle the border controversy with Venezuela.

After Guyana’s co-agent, Sir Shridath Ramphal, wrapped up arguments to the court, Judge Mohamed Bennouna asked a question based on paragraph 2 of the 1966 Geneva Agreement that states either the controversy is resolved or all the means of peaceful settlement, in accordance with Article 33 of the United Nations Charter, have been exhausted.

“Would it be possible to think of a situation in which all of the peaceful means of a settlement have been exhausted without the controversy having been resolved?,” he asked.

The ICJ President said the text of the question would be sent to Guyana “as soon as possible” and Guyana would have to send a written reply no later than Monday, July 6, 2020.

He said Guyana and Venezuela would be advised when the ICJ would deliver its decision on whether it has jurisdiction to hear the case aimed at settling the controversy over the validity of the 1899 Arbitral Tribunal  Award that settled the land boundary between the two neighbouring South American nations.

Venezuela has refused to participate in the hearings by the International Court of Justice (ICJ), saying that that body does not have jurisdiction.

Instead, Venezuela has submitted a 56-page memorandum to the court with some material.

One of Guyana’s lawyers, Paul Reichler told the ICJ that contrary to Venezuela, there is no need for the parties to agree before on whether to take the controversy to the ICJ. He suggested that Venezuela flipped-flopped over the decades about whether the ICJ had jurisdiction to settle the controversy if discussions and mediation failed.

“As the Foreign Minister of Venezuela, himself, emphasised ‘it was on the basis of this Venezuelan proposal that the Geneva Agreement was reached’. That was how Venezuela understood the agreement in 1966.

Venezuela’s current reading of the agreement is completely at odds with the interpretation given by its Foreign Minister who negotiated and agreed to its terms and explained their meaning to the National Congress upon ratification,” said Reichler who has been working for the Guyana government since the 1990s.

The United Nations Secretary General, Antonio Guterres, at the request of Guyana referred the case to the ICJ in keeping with provisions of the 1966 Geneva Agreement because 50 years of mediation had failed to resolve the controversy. 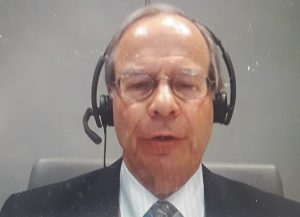 Sixty years after the 1899 Arbitral Tribunal Award had settled the land border with then British Guiana, Venezuela had rejected that and claimed the entire Essequibo and all of the Atlantic sea offshore that region.

Guyana’s lawyers reviewed and outlined their interpretations of the Geneva agreement and the United Nation (UN) Secretary General’s ultimate decision to refer the case to the ICJ. The lawyers submitted that the UN Secretary General, having exhausted all other processes for more than 50 years, including 24  years of mediation, to find a resolution referred the controversy to the World Court.

Arguments were submitted covering the Geneva agreement, its acceptance by Venezuela of Guyana’s boundary for 60 years before laying claims to three quarters of Guyana, the acceptance of the Venezuelan government that a final arbiter is necessary and the exchanges between the two countries to resolve the controversy.

Sir Shridath, a former Guyana Foreign Minister who had been part of the early negotiations with Venezuela after that Spanish-speaking nation had repudiated the 1899 Arbitral Tribunal Award, told the ICJ that 120 years have passed since “international law spoke” but since then Venezuela has “cultivated a nationalist passion” to disavow the award and claim the Essequibo Region or almost three quarters of Guyana’s “sovereign territory.”

He indicated that Guyana was unhappy that Venezuela did not participate in the hearing on the question of whether the ICJ has jurisdiction. “It is unfortunate that Venezuela has decided not to participate in these hearings” but he welcomed the fact that “the court has not been left to speculate about what Venezuela would have said” because that country has, rather than file a counter-memorial, submitted a 56-page memorandum and 156-page annex setting out the basis for its objection to jurisdiction and “much more.”

International Law Professor at McGill University, and member of the Permanent Court of Arbitration, Mr. Payam Akhavan recounted that Venezuela had repudiated the 1899 Arbitral Award as Guyana had been on the cusp of attaining political independence. He said there had been fears that Guyana would have become a communist state. Back in the early 1960s, Professor Akhavan said then Venezuelan Foreign Minister Ignacio Iribarren Borges had indicated that his country might seek the ICJ’s intervention.

The Law Professor said then Foreign Minister Ramphal had ruled out holding discussions on the issue and then British Guiana could noit accept that the 1899 Arbitral Tribunal Award was invalid.

2020-06-30
Denis Chabrol
Previous: Mayors of APNU+AFC stronghold towns call for Granger to be sworn in
Next: Berbician charged with Enmore hit-and-run teenager’s death