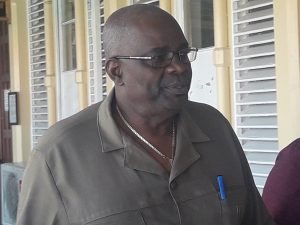 Through informant, Desmond Morian, Lowenfield is charged with misconduct in public office contrary to common law.  TNM’s  Daniel Josh Kanhai’s case is that Lowenfield allegedly conspired to commit a felony.

The Director of Public Prosecutions (DPP), Shalimar Ali-Hack can formally issue a notice to abandon the charges.

The Chief Elections Officer recently said that he complied with Guyana’s constitution and applicable laws by presenting a report to the Elections Commission containing valid and credible votes in accordance with guidance from the Guyana Court of Appeal’s decision.

Attorney-at-Law, Glen Hanoman hopes that the DPP takes over the charges and orders the Guyana Police Force to conduct thorough investigations.

Kanhai alleges, in his charge against Lowenefield, states that between March 5 and June 23, he “conspired with person (s) unknown to commit the common law offence of fraud, to wit, by representing to the Guyana Elections Commission that tables attached to his elections report dated 23rd June, 2020 accurately reflected the true results of the said election, in order to materially alter the results of the said election, with intent with intent to defraud knowing the said tabulation to be  false.”

Particulars of the offence of misconduct in public office are that between March and June 29, 2020 Lowenfield “without lawful excuse or justification, wilfully misconducted himself” by ascertaining results of the March 2, 2020 general and regional elections “knowing the said results to be false, the said wilful misconduct amounting to a breach of the public’s trust in the office of the Chief Elections Officer.”

Attorney-at-Law Hanoman said the circumstantial and actual evidence are sufficient to make out a strong case against the Chief Elections Officer. “We are confident that there is a strong case and the evidence is compelling to prove his pattern of behaviour. He is in custody of the Statements of Poll. I would not be part of this case for propagandistic purposes,” he said.

The lawyer lamented that the DPP and police have been taking no interest in election cases , but he said no complaints were filed with police for fear that they would end up a certain place and swept under the carpet”. Now that the private charges have been filed, he hoped that the DPP would instruct the police to take over the files and instruct police to  conduct a thorough probe,  “It is hoped that the charges will catapult the DPP and police into action…We are hoping that we can get police with untainted eyes,” he added.

The Attorney alleged that the Chief Elections Officer has “acted very inconsistently” that all amount to favour one political party.

Concerning the fraud case, Hanoman said the tables that were provided by the Chief Elections Officer in reports to the Chairman of the Guyana Elections Commission, Retired Justice Claudette Singh show that 115,000 people were disenfranchised.

The March 2, 2020 presidential, parliamentary and regional council elections have so far seen three sets of declarations, two of which have been submitted to the Commission for a final declaration of results. Lowenfield had also submitted a third report containing tabulations from the recount as well as observations about alleged impersonation of dead and emigrants as well as other irregularities and anomalies.