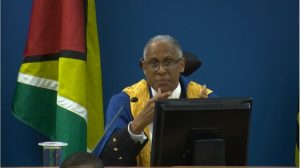 Amid a flurry of calls for the Guyana Elections Commission (GECOM) to use figures from the national vote recount to declare the  results of the March 2, 2020 general and regional elections, the Caribbean Court of Justice (CCJ) on Thursday assured that nothing outside the courtroom would be used to determine the case.

Attorney-at-Law, John Jeremie, for A Partnership for National Unity+Alliance For Change (APNU+AFC) supporter Eslyn David, highlighted that statements were being made by “persons outside of the court with considerable  influence” in the Caribbean that impact on the decision of the Guyana Court of Appeal and the CCJ should guard against this. “I go no further than that,” he said.

CCJ President, Justice Adrian Saunders also made it clear that the Trinidad-headquartered court has not yet decided whether it has jurisdiction- the legal right- to hear the appeal by the People’s Progressive Party’s (PPP) General Secretary, Bharrat Jagdeo and presidential candidate, Dr. Irfaan Ali. “You can rest assured that the Bench is going to treat with this matter only on the basis of the material that you and your colleagues- those with you, those against you- those who are in this court today  on the basis if what you submit and that is what is always done certainly by this court so you can rest assured that we are not  going to have regard to anything which is being said outside of the court and which does not feature as a relevant part of these proceedings,” Mr. Saunders said.

Justice Saunders also declined a request by Change Guyana political party’s Attorney-at-Law, Kashir Khan and Jagdeo and Ally’s lead counsel, Senior Counsel Douglas Mendes for  the Chief Elections Officer to be instructed to withdraw his report that reflects a subtraction of 115,000 votes and a victory for APNU+AFC).

“We cannot undo what was done by the Chief Elections Officer,” he said, adding that lawyers were free to submit arguments on whether they believed any illegality was committed. The CCJ President, at the same time, stressed that that nothing should be done by GECOM to violate an interim order blocking the declaration of results. “The status quo on the ground must remain as it is so the proceedings are not prejudiced,” he said.

Attorney General, Basil Williams explained that Lowenfield submitted his report to GECOM before the CCJ issued its interim order last week Tuesday. At that point Mendes suggested that perhaps Williams could relate to the Chief Elections Officer that he should withdraw the report that took away 115,000 votes because the “AG has saw it fit to provide excuses” for Lowenfield.  Williams fired back, “I’m not no messenger.”

Williams assured the CCJ that President David Granger has often committed that he would respect the rulings of the court.

On the question of jurisdiction, Justice Saunders said those arguments should be incorporated in submissions between now and Tuesday morning ahead of oral arguments at 9 AM on Wednesday.

APNU+AFC, the Attorney General and the GECOM Chairman have argued that the Guyana Court of Appeal did not have jurisdiction to hear the matter. In the end, the local appeal court ruled by a 2-1 majority that the constitutional provision “more votes cast” means “more valid votes cast” and should incorporate the gazetted recount order that refers to votes that could have been verified with voters’ lists, counterfoils, stubs, poll books and other statutory material as well as those that were free of impersonation of dead people and others who were overseas on March 2, 2020.

The PPP wants the CCJ to throw out a decision by the Guyana Court of Appeal earlier this week that the words “more votes are cast” in Article 177(2)(b) of the Constitution of Guyana be interpreted to mean “more valid votes are cast in relation to the election held on 2nd March 2020”.