“We believe that a declaration should be made shortly” – Jagdeo 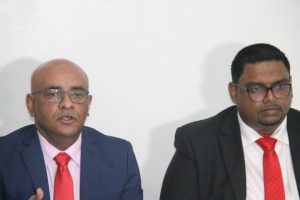 Hinting that the People’s Progressive Party (PPP) might go to the Caribbean Court f Justice (CCJ) to appeal Monday’s decisions by the Guyana Court of Appeal, that party’s General Secretary Bharrat Jagdeo said the Elections Commission (GECOM) should declare the results of the March 2, 2020 general elections.

“We believe that a declaration should be made shortly on the basis of this,” he said on his Facebook page shortly after the ruling. He added that “there is nothing that they (the Justices of Appeal) said today that can stop a declaration from being made.”

The Change Guyana political party, through its Attorney-at-Law, Kashir Khan, secured a three-day stay of the Guyana Court of Appeal’s  decisions after the court by a majority 2-1 decision decided that “more votes cast” means “more valid votes cast” in keeping with the gazetted recount order.

Jagdeo stayed clear of referring to that order, which includes a reconciliation of the votes with the voters’ list as well as considering counterfoils and stubs.

A Partnership for National Unity+Alliance For Change (APNU+AFC) has been complaining bitterly that more than 200,000 votes cannot be considered valid because there were impersonation of deceased and emigrants as well as other irregularities and anomalies. In what appears to be a mirror of the coalition’s concerns,  GECOM’s Chief Elections Officer, Keith Lowenfield, in his observation reports, suggested that only 185,000 of the 460,352 votes have not been blotted by such allegations.

The PPP, on the other hand, has maintained that the Chief Elections Officer has no power to invalidate 285,000 votes and that is a responsibility of the High Court through an election petition. “What they are trying to do is to invalidate valid votes,” Jagdeo said. The former President said that following  Monday’s judgement, “this matter is back with GECOM” which he argued has already decided what are valid votes as stated on the Statements of Recount, district certificates of recount and the regional and national tabulations in Lowenfield’s initial report to the Commission.

The Chief Elections Officer should have submitted a second report to the GECOM Chairman, Retired Justice Claudette Singh last week Tuesday but he declined to do so after receiving a notice of motion.

While saying that the PPP would be studying the Guyana Court of Appeal decision before deciding its next move, he expressed confidence that the “CCJ will set aside the judgement.”

The CARICOM-scrutinised recount shows that the People’s Progressive Party/ Civic (PPP/C) got 233,336 valid votes and A Partnership for National Unity+Alliance for Change (APNU+AFC) Coalition 217,920 valid votes.

The Caribbean Community (CARICOM) recount team, Organisation of American States, Commonwealth, Carter Centre, United States, Britain, Canada, European Union, Private Sector Commission and the Muslim Youth Organisation have all called for the recount results to be used to declare the final  results and install a government that reflects the democratic will of Guyanese.