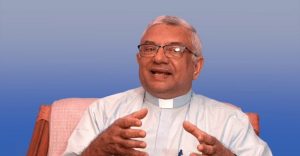 Fr. John Persaud is to take up his appointment as soon as he can travel to Jamaica.

There he will meet with the Apostolic Administrator, Clergy, Religious and the Faithful of the Diocese of Mandeville to begin preparations for his Episcopal Ordination.

Prior to this appointment, he has been a Priest of the Diocese of Georgetown, Guyana,

Fr. Persaud was ordained a Diocesan Priest on 14th July 1985 and has served in his home Diocese of Georgetown in various capacities as Parish Priest, Administrator of the Cathedral, Vicar General, Vicar for Clergy, Judicial Vicar, Director of Vocations and Director of Religious Education.

He has also served the wider Caribbean Church as Judicial Vicar of the Eastern Antilles Interdiocesan Tribunal and as General Secretary of the Antilles Episcopal Conference.

Fr. Persaud is the third child of John and Sheila Persaud and he was born in Queenstown, Georgetown on 28th August 1956.

He has five sisters and three brothers.  He did his Seminary formation at the Seminary of St. John Vianney and the Uganda Martyrs in the Archdiocese of Port of Spain, Trinidad and Tobago.

He did his postgraduate studies in Religious Education in Ireland and in Canon Law in Rome.