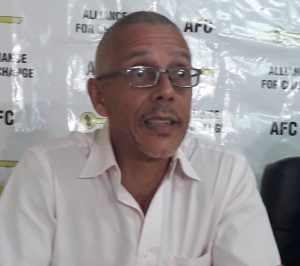 Executive member of the Alliance For Change (AFC), Dominic Gaskin Friday night raised the spectre of the David Granger coalition refusing to give power, but at the same time he urged them to concede defeat and start preparing to recapture swing votes in the 2025 general elections.

“The claims of fraud were grossly exaggerated and, unfortunately, designed to fool party supporters, who had placed their faith in the coalition, into believing that there was actual evidence of serious elections rigging by the PPP-C (People’s Progressive Party Civic),” said Gaskin who is the President’s son-in-law.

Gaskin, a former Minister of Business, warned that if A Partnership for National Unity+Alliance For Change (APNU+AFC) hangs on to power despite clear evidence of a defeat by the People’s Progressive Party (PPP), the chances of regaining office in another five years would be virtually impossible.

“All that has occurred since March 4th will make it extremely difficult for APNU and/or the AFC to defeat the PPP in 2025,” he said while at the same time acknowledging that he is not a political analyst. He advised the coalition to  take steps to regain the confidence of swing voters who  have determined the outcome of Guyana’s last three general and regional elections including the March 2, 2020 polls.  “My message to my colleagues in the APNU+AFC is simple. No one elected us to remain in office forever. There is no reasonable basis on which you can claim to have won more votes than the PPP-C in these elections. Level with your supporters and start directing your energies towards becoming a credible opposition party in time for 2025,” he said.

Gaskin said now that the Caribbean Community (CARICOM)-scrutinised recount has been completed, “I can no longer wait quietly and politely while our country gets hijacked, ridiculed and torn apart.” Based on the trends so far, he feared that APNU+AFC would give up  State power unless it is satisfied that more votes are cast for another party that “we deem credible”, a condition that would never be satisfied. “All of this leads me to a very uncomfortable conclusion. The APNU+AFC has no intention of relinquishing control of government,” he said on his Facebook page.

He said APNU+AFC supporters were misled into believing that the coalition had won the elections and there was a deliberate attempt to discredit the entire process.

Bemoaning the inflated declarations of more than 40,000 votes by Region Four Returning Officer, Clairmont Mingo, he recalled being disappointed that the leaderships of APNU and AC had claimed that Mingo’s numbers were the same as the coalition’s Statements of Poll. Gaskin urged APNU+AFC leaders to explain the inconsistencies. “The recount went ahead and the results showed clearly that Mingo’s numbers could not have been based on actual Statements Of Poll. At the very least APNU+AFC’s supporters deserve an explanation from its leadership as to the basis on which they claimed to have won the election prior to the recount,” he said.

Gaskin, in alluding to Thursday’s Guyana Court of Appeal action that is line with APNU+AFC’s concerns about the credibility of the elections, will now have to await the outcome of yet another tedious process.