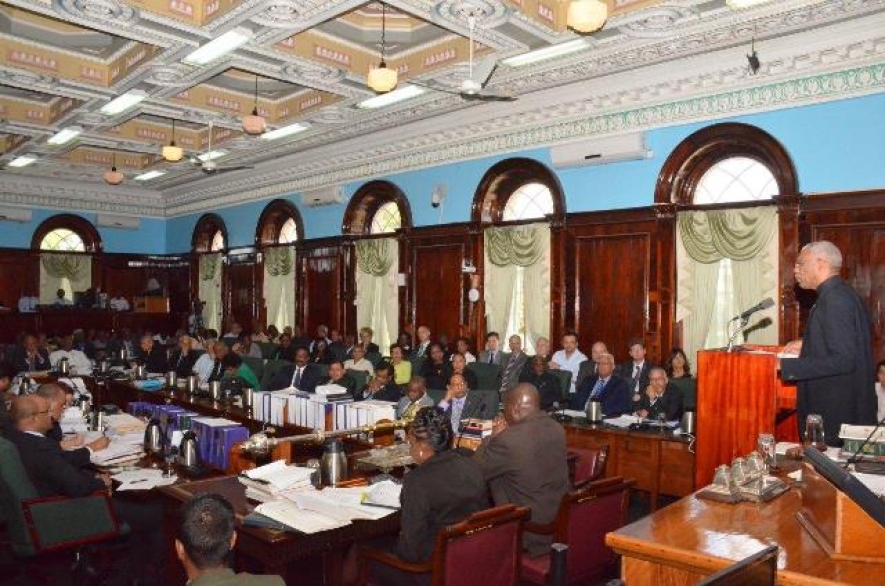 President David Granger on Sunday hinted that a state of emergency would have to declared to pave the way for the reconvening of a Parliament and the approval of funds for government spending, if the Guyana Elections Commission (GECOM) scraps the March 2, 2020 general and elections.

“It is possible…I know it has been done before. It is not an option that I would embark on without receiving agreement of all the parties concerned. I don’t think it should be undertaken lightly or arbitrarily,” he told reporters at State House.

He recalled that the Parliament had been recalled in 1990.  That was when then President Desmond Hoyte had dissolved Parliament to hold general elections, but later reconstituted it to  allow for electoral reforms, including house-to-house registration, and elections were called in 1992.

Faced with a “massive shortfall” in revenues and a “massive increase” in expenditure, Granger said there was a huge gap that he hoped would be partly closed by the convening of Parliament after the elections cycle concludes. “Right now, we are not running on empty but we are running with very low funds,”  Granger said.

The President said the reconvening of Parliament would  require “some form of agreement” or legal mechanism. In 1990, the elections had not yet been held unlike now. Granger conceded that Guyana would face “uncharted territory” in finding a way for Parliament to approve funds if GECOM annuls the elections.

Granger appeared to stress repeatedly that the GECOM Chairman would say that alleged fraud and other irregularities were so severe that she would be unable to deliver a result from a credible election. “I think they can very well say that- that we cannot make declaration because the information indicates that the process has been badly flawed,” he  said.

Asked where would that leave Guyana, the President said that would be a matter for the Commission or the Courts because “we would be in a legal no-man’s land” as the country has never had a situation where there has been no declaration. “I do feel that in this case it is not impossible that the Election Commission will say that based on the evidence that was presented, we cannot declare because the information indicates that there has been widespread fraud or that the process is flawed,” he said.

Granger repeatedly cited a bloated list as the primary route for so many irregularities.

Chief Elections Officer, Keith Lowenfield told GECOM Chairman Claudette Singh in a report that based on impersonation and other regularities, only 185,302 votes are not tarnished and of that the People’s Progressive Party (PPP) would get  56,627 votes and A Partnership for National Unity+Alliance For Change (APNU+AFC) will get 125,010.

Of the 460,352 valid votes cast, the incumbent A Partnership for National Unity+Alliance For Change (APNU+AFC) has won 217,920 and the People’s Progressive Party 233,336. The three ‘joinder’ parties- A New and United Guyana (ANUG), Liberty and Justice Party (LJP) and The New Movement (TNM) got a total of 5,214‬ votes

2020-06-14
Denis Chabrol
Previous: APNU+AFC, PPP at loggerheads over “valid votes” in Chief Elections Officer’s report
Next: Granger scolds Gonsalves for “stealing an election” and “take your licks like a man” remarks